On July 17th, the first camp Lorelei went to was at the Science department at the Satellite Beach Community Center. There she learned all about the various magicians’ techniques of distraction, of making something look like something it isn’t, of creating illusions of all kinds. This became a theme for after-dinner entertainment at their home, on the numerous occasions when GranMiri and Papa were invited down for dinner. On one of those occasions, we were treated to the Deep Magic of a splendid sunset reflected onto towering cumulus as we left. Everyone was awed and amazed. 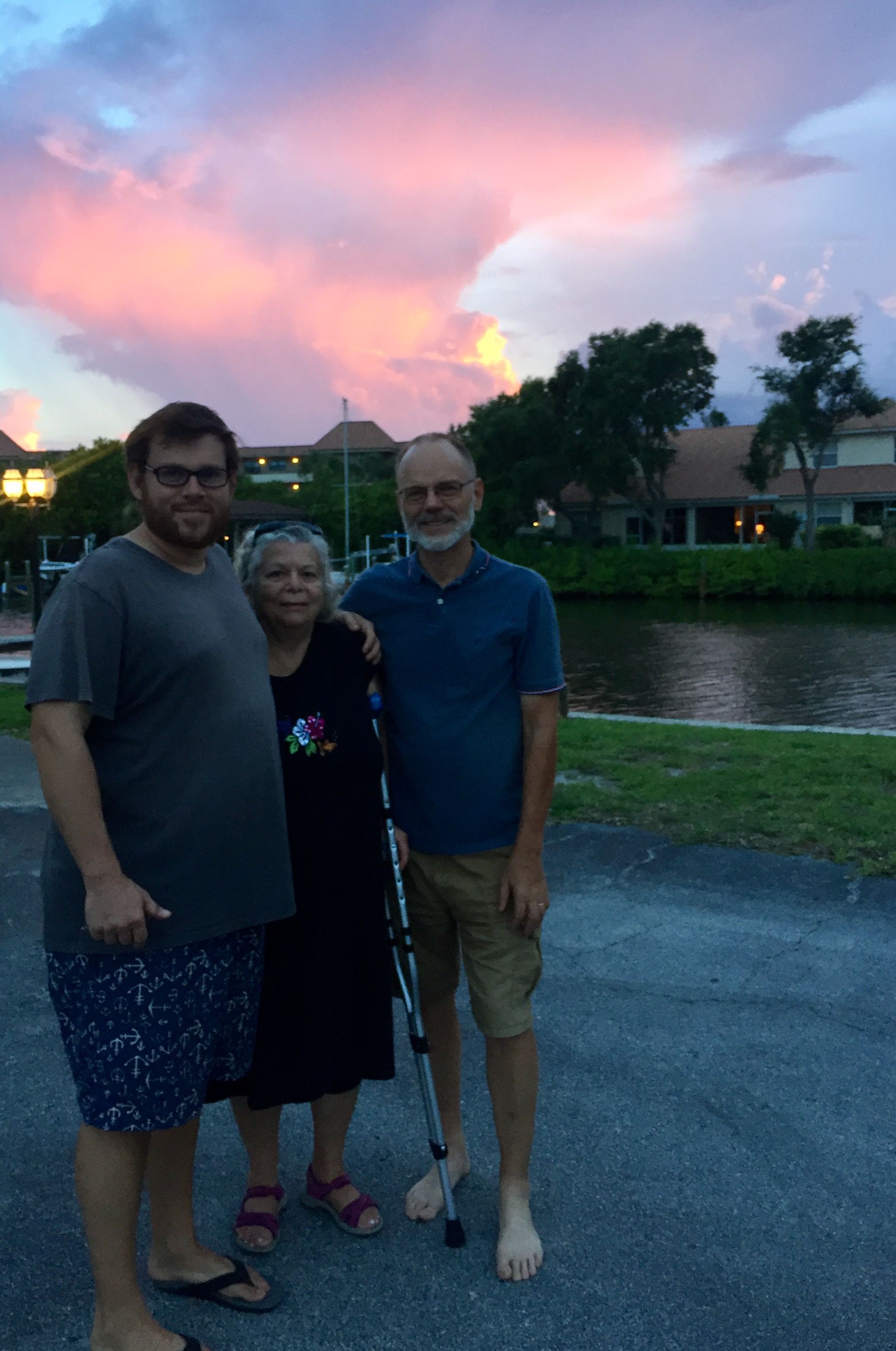 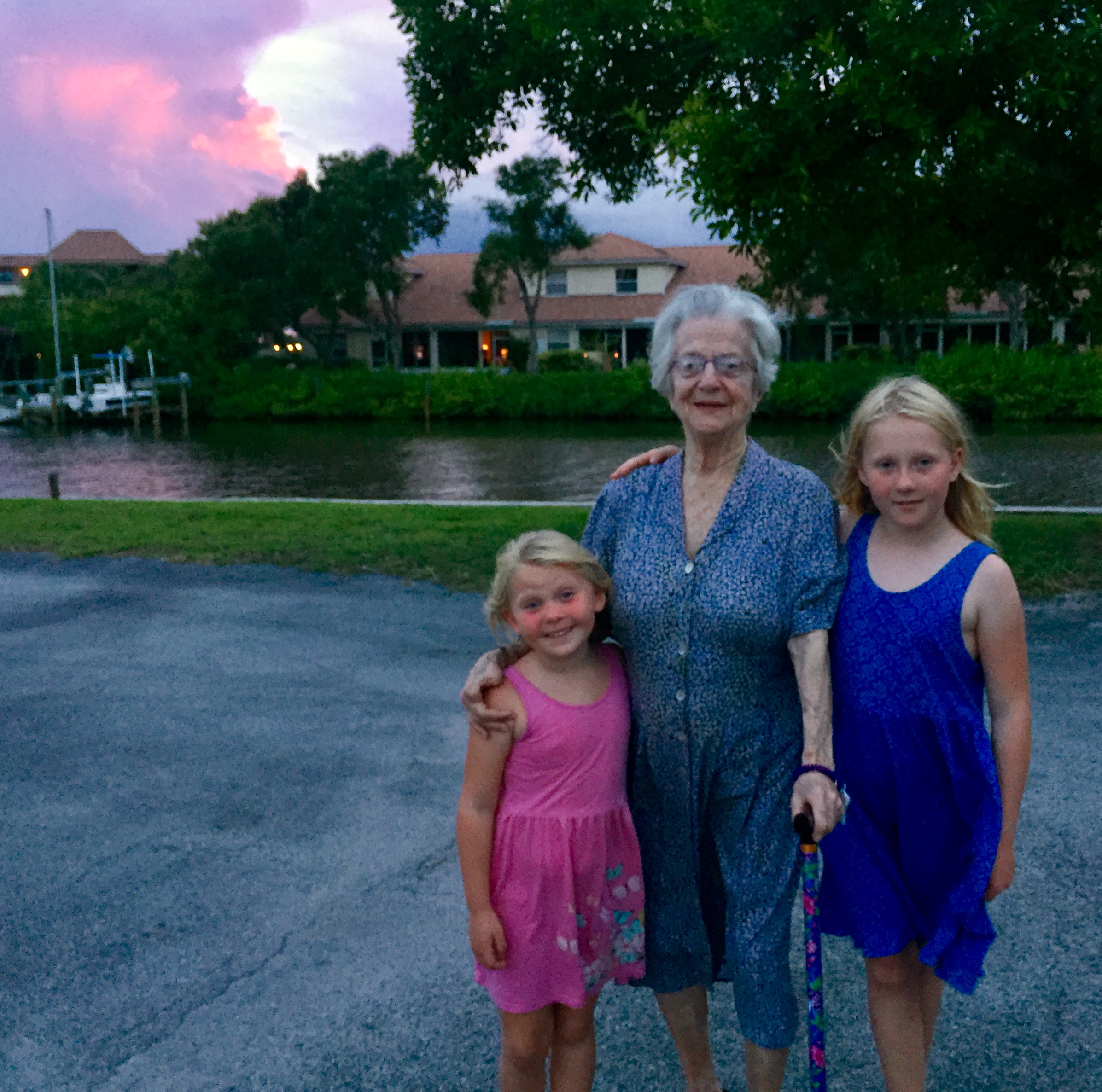 On August 15th, the very last day of the Great Summer Visit of 2017, both Papa and I (GranMiri) and my mother (Great-Gramma Nornor) were invited to the Champness place down at the bottom of our street for dinner. We were treated to April’s scrumptious chicken parmesan with gluten-free noodles, and for dessert, a fruit cobbler like no one had ever tasted before! Our Audrey, who is nine years old, is the graduate of more than one cooking school, and her approach includes both fine classical technique and a creative flair. The result was a fruit cobbler of peach, pear, apple, cherry, blueberry and strawberry, with a shortbread topping into which she had mixed dark chocolate chips! I am afraid I cannot easily report on the result, because it was quite beyond description, except to say that it was yummy! Exceptionally yummy! You really had to be there! 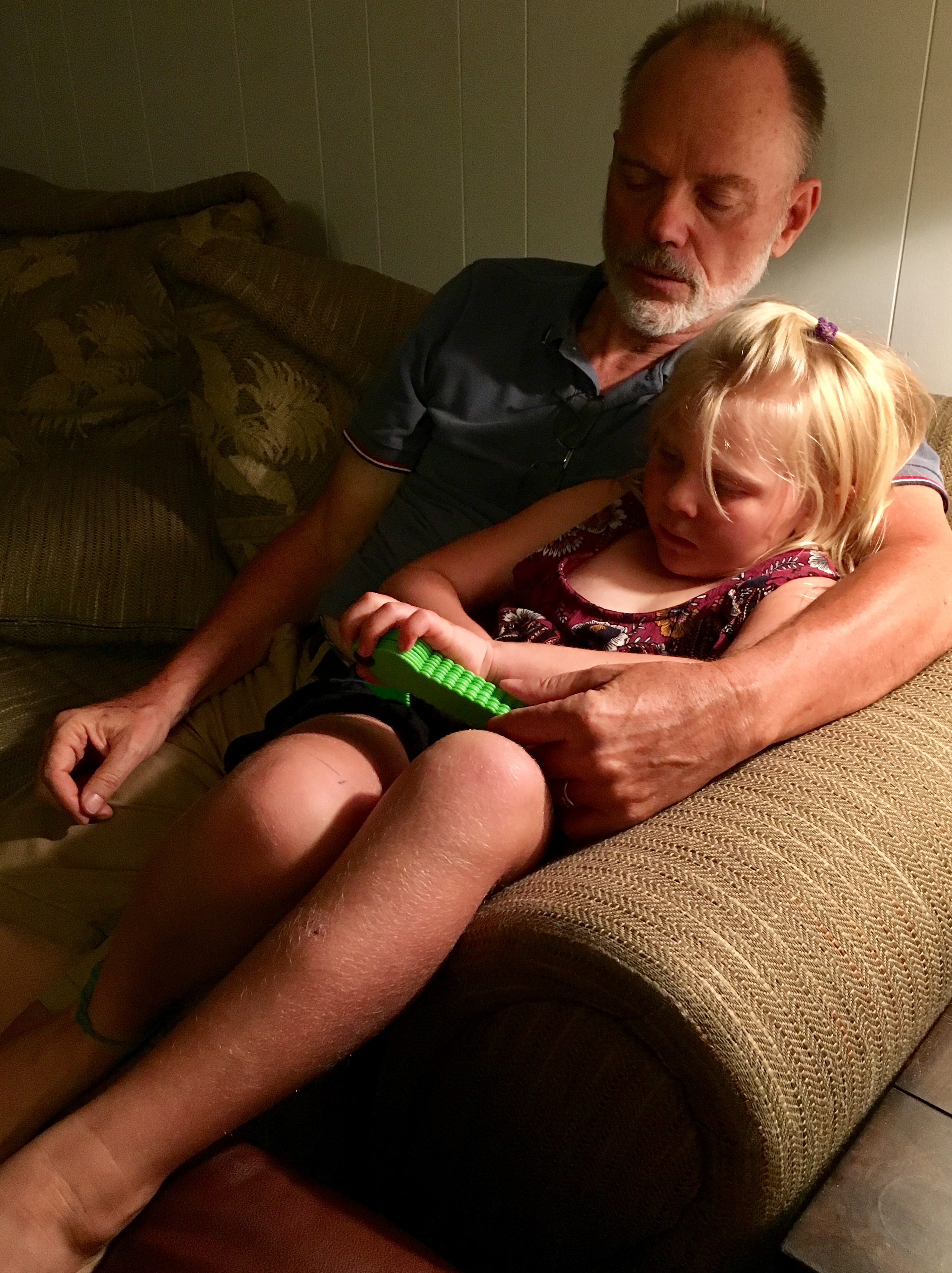 after dinner math with Papa

On one of the last days of the Great Summer Visit of 2017, Lorelei was here for lunch. I brought a pot of rice to the table and put it down on one of the tiles Audrey had decorated with seashells and glass deco beads at Miss Betsy’s Art Camp. “Oh, GranMiri, you can’t put pans on that.” Lorelei exclaimed, “That’s art!” I excused myself and found something else to put my pot on. I certainly was not going to reject the heartfelt advice of one of the best and most passionate dish-doers I have ever had the privilege to have around the house. Lorelei, at six, is an accomplished washer of dishes, but somehow I had never had the experience of doing dishes beside her. Both the boat she lives on and our apartment lack mechanical dishwashing appliances, so the technique and dedication of the person doing the dishes is no small concern to the general welfare of the household. The day I found myself standing beside her at the sink revealed a true devotion to the principle of circular motion in the process of getting dishes and pots clean. “Look,” said Lorelei, “It’s like a tornado!” And it was! Away went all the schmutz in the energetic circular motion applied by Lorelei! Now, every time I wash dishes, I think of Lorelei, and apply more energetic circular motion. 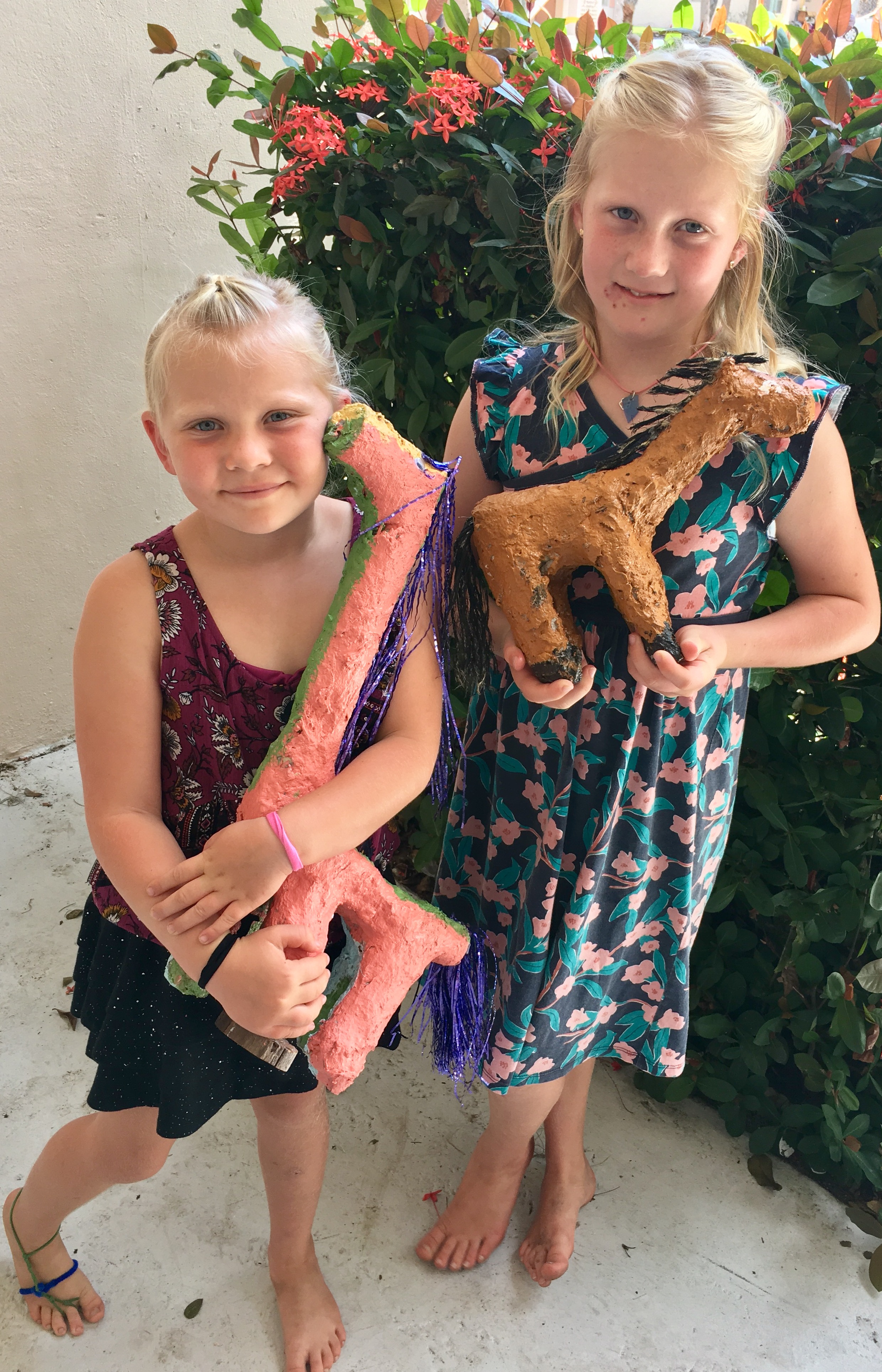 Audrey also brought home a couple of her culinary accomplishments during the last week of July: an apple pie with pie crust rosettes, (who knew you could make rosettes out of pie crust?!) and a beautifully decorated cake. Was that the evening Great-Gramma Nornor had seconds and thirds? With vanilla ice cream? At age 92, it’s amazing what she can put away…not to mention the remarks she can come out with! She was a frequent guest all four weeks, and kept everyone tickled with her slightly zany, off-the-wall remarks. 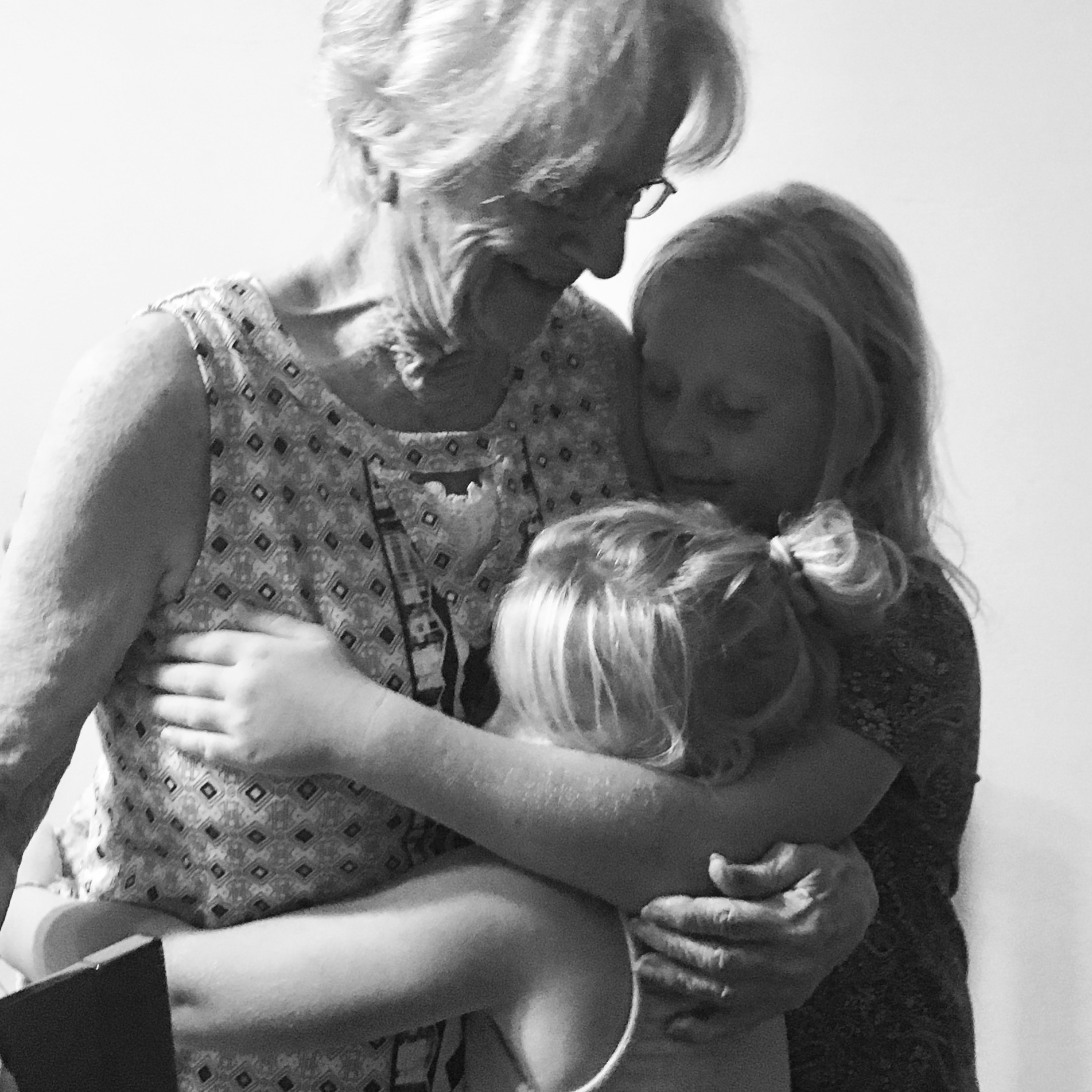 Another culinary adventure we had the privilege to be included in was Audrey’s Graduation Feast at the Kids Culinary Academy. Audrey was on deck at 7am every morning she attended and home around 2, but Saturday at noon, they presented a full-featured buffet with appetizers, salads, all kinds of main dishes and sides, and a staggering array of desserts, including the much-anticipated “Baked Alaska”. They admitted that they had started the preparation on Friday, but even so, it was almost unbelievable what 12 or 13 kids could put together by noon–and all of it top-notch! Inspiring! 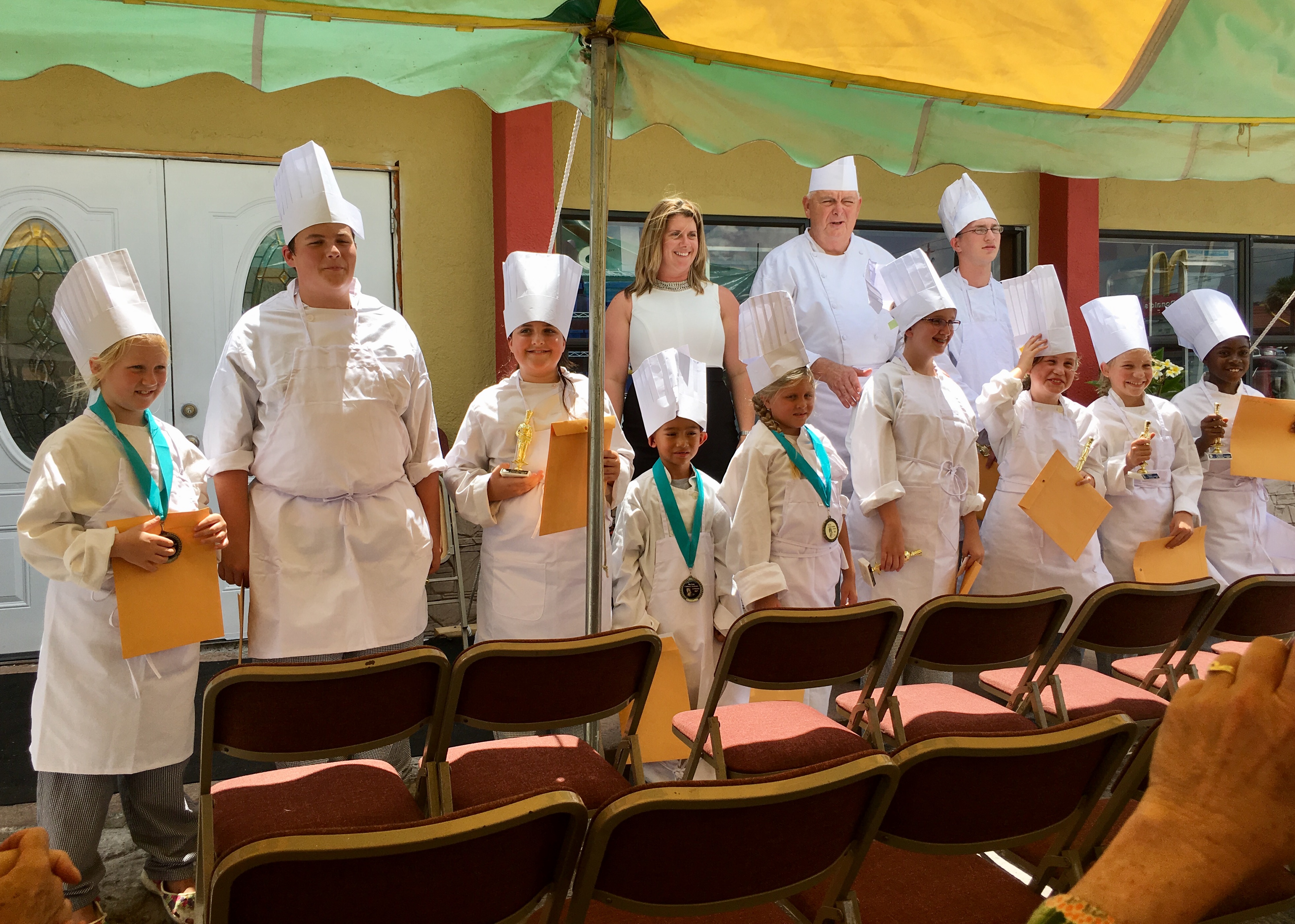 I attended that Feast on crutches, favoring a twisted knee that happened when I was rushing to get ready to go to the beach with Audrey and Lorelei the first Sunday they were here, July 23. So instead of the beach, we went to the Urgent Care, where they told me I hadn’t broken anything and to take lots of ibuprofen and stay off that leg for a few weeks. Oh yes, ice it down. Jacob already had me doing that. There were complications filling a prescription for a walker, so Jacob got me crutches, which turned out to be very useful. After several hours of Urgent Care, we were hungry, so we went to Bizarro’s for a late lunch. That was as close as we got to the beach. 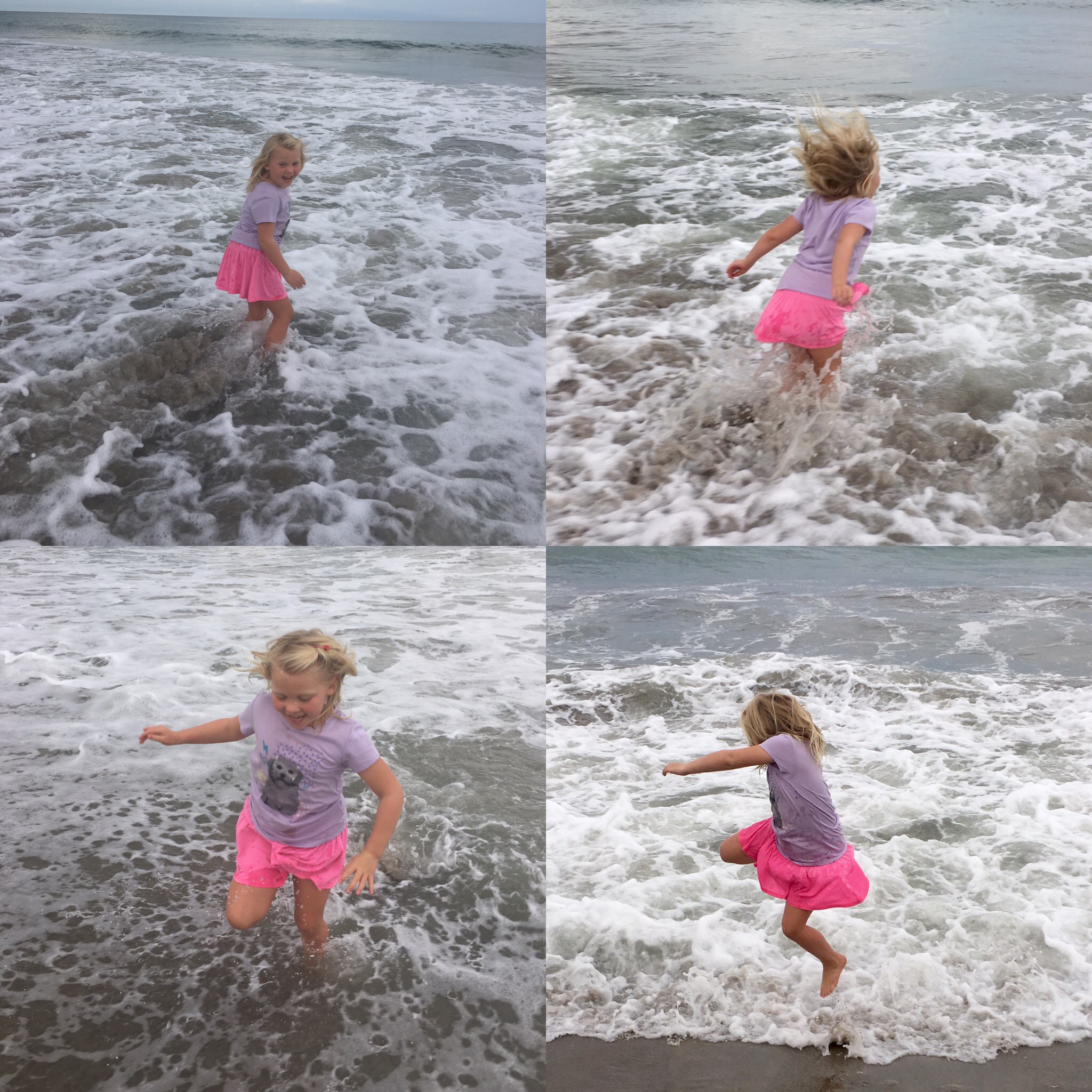 playing at the beach near Bizarro’s 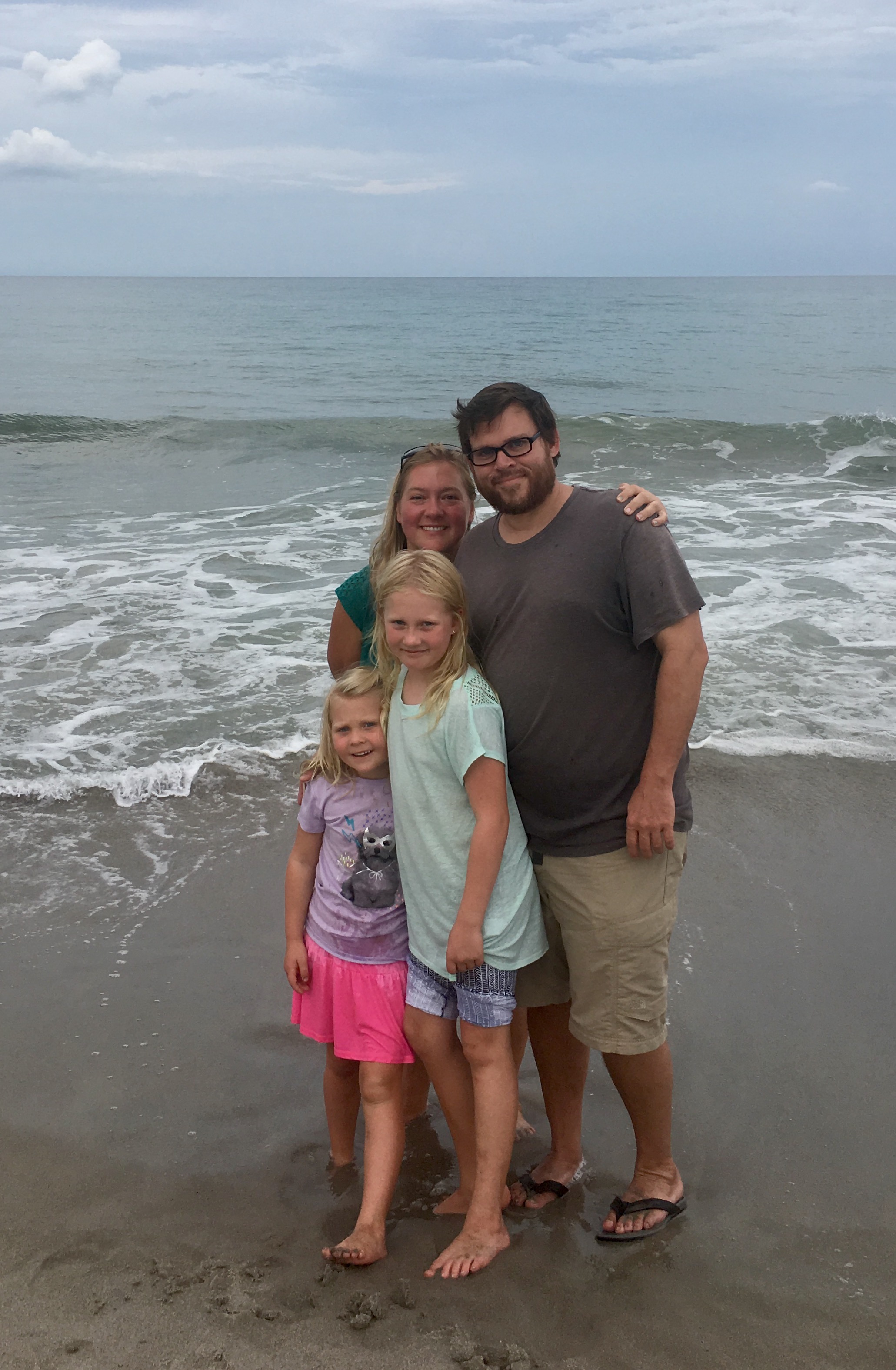 It turns out that Audrey and Lorelei have actually had plenty of beach in the last couple of years, sailing around the Bahamas, then living in a boatyard in St. Martin, so the following week Papa and I took them to Ponce Inlet Lighthouse, and for spaghetti at Jerry’s, our favorite Italian restaurant. Audrey did the 203 steps to the top of the lighthouse while Lorelei and I made a friend at the playground next door. The next weekend, we took them to the Fee Avenue pool, which has some nice water playground elements, a waterslide, for instance, and a zero-entry kid pool. Of course, Audrey and Lorelei, who swim like fish, spent most of their time in the deep end, diving for their “dive jewels”.

Sunday, we met up at Harbortown Marina in Fort Pierce, where the young Champnesses had lived aboard the first Lark during 2015 and 2016. Jacob and April have been busy during the four weeks of the Great Summer Visit of 2017 setting aside various things from their storage locker that they will not need on the current Lark, and they had set aside a crate of stuff that might be useful to their erstwhile marina neighbors at the picnic pavilion at Harbortown. It was great to see familiar faces from times we had visited them there. 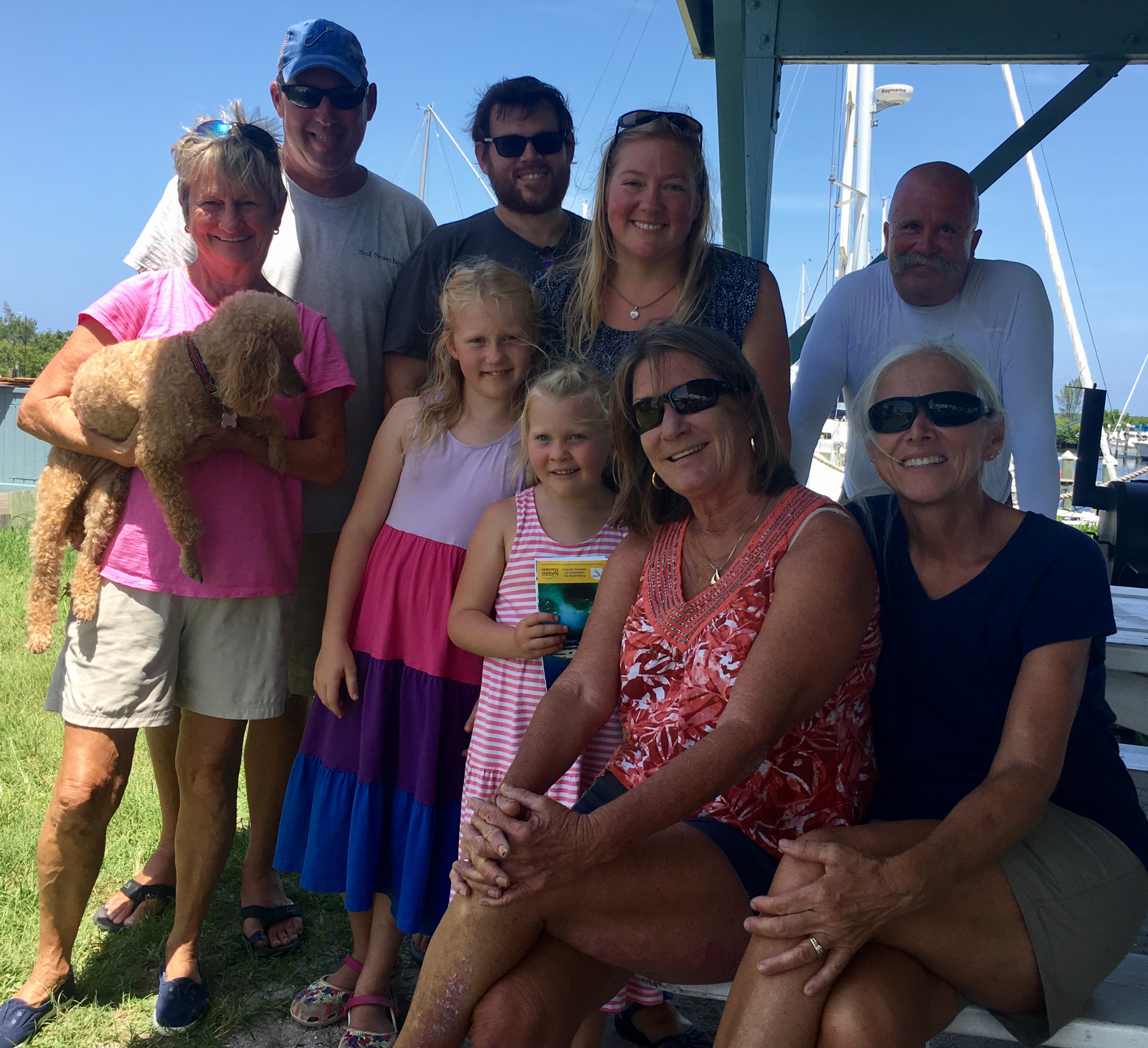 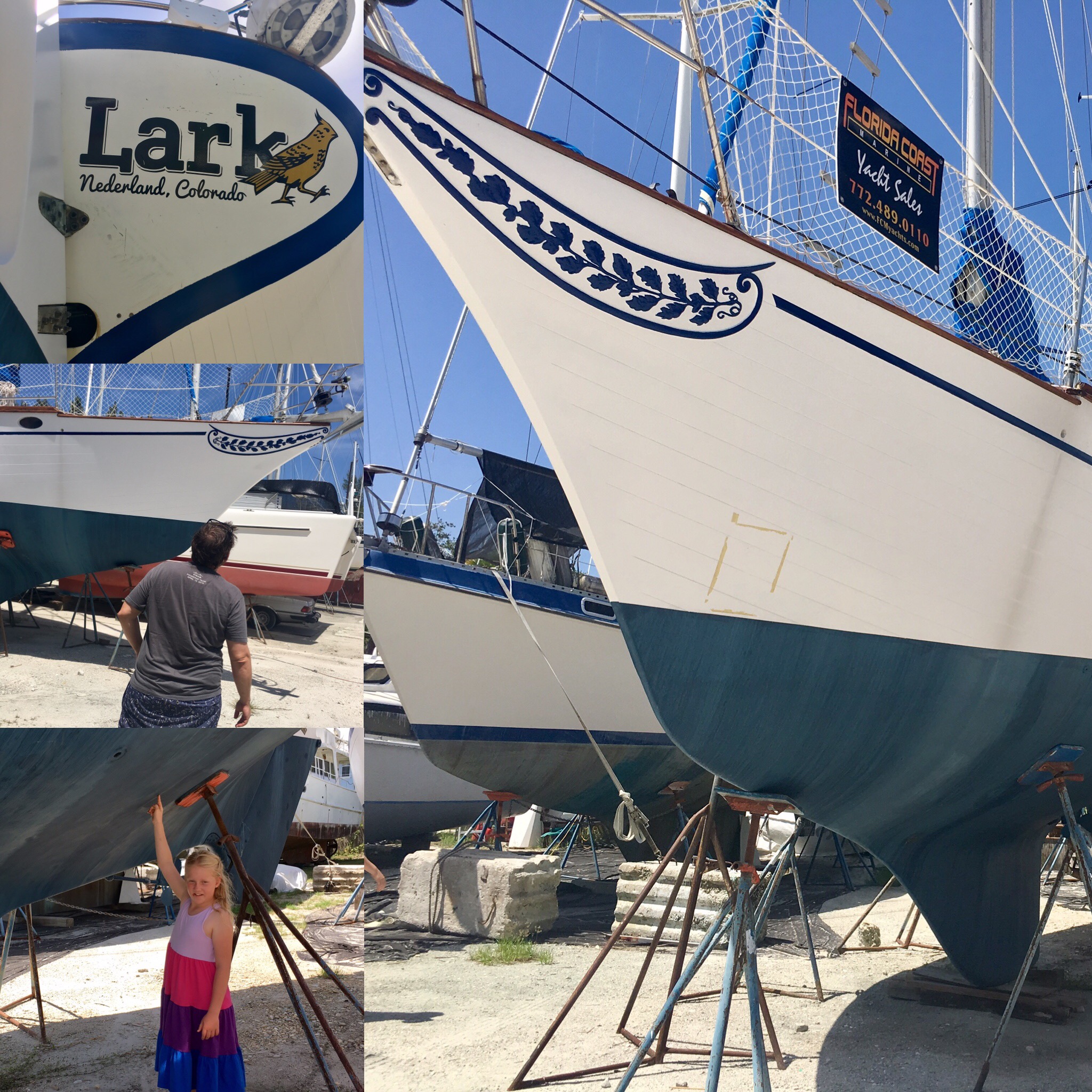 On the way home from Fort Pierce, we stopped at Round Island Park, south of Vero Beach, where the manatees and fiddler crabs were in top form, and provided an hour of fascinated observation, even in the fearsome heat. Lorelei was able to catch one of the smaller fiddlers and enjoy the tickly sensation of having it try to burrow between her fingers. 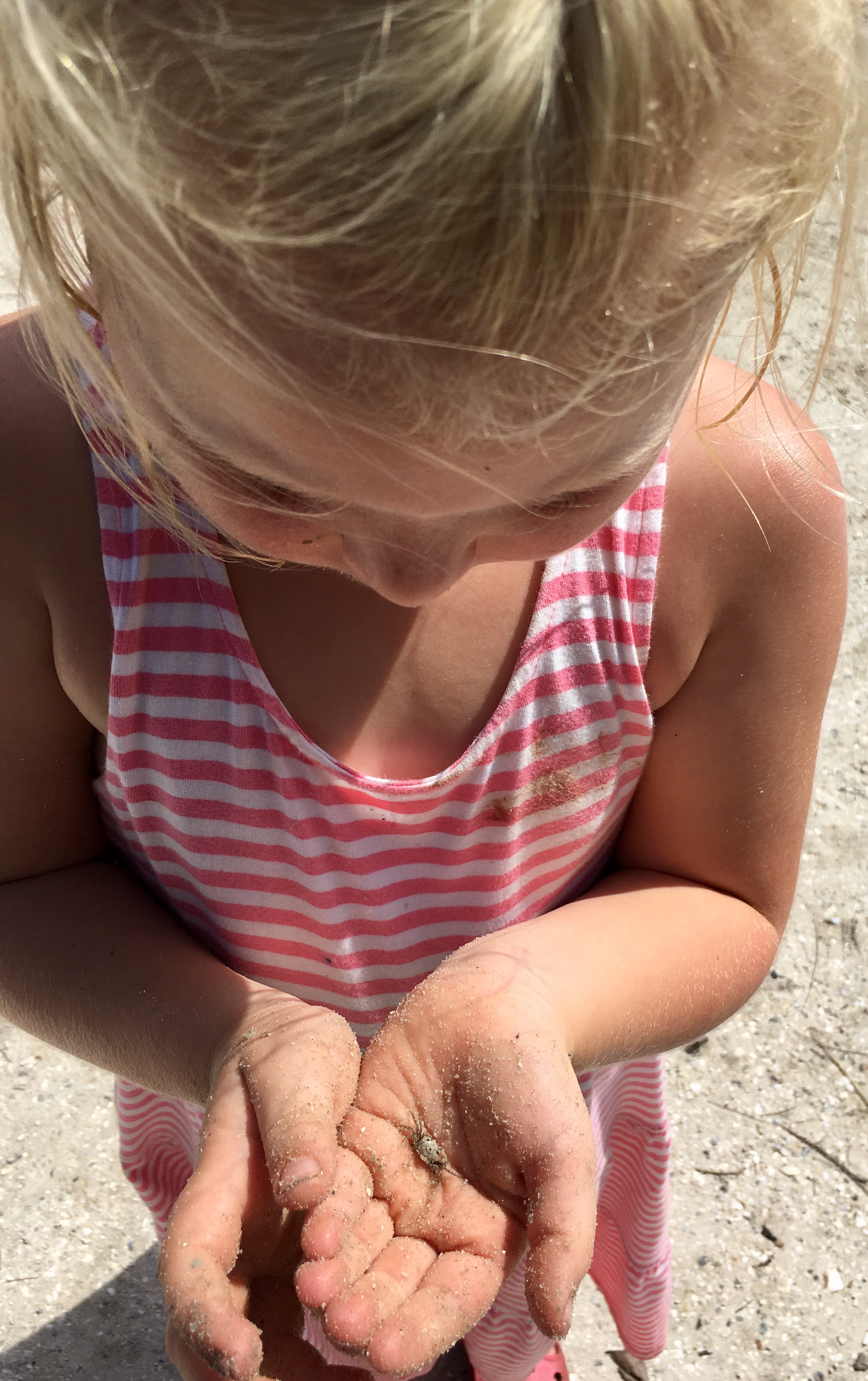 Lorelei with the crab

Another pool adventure took April, GranMiri, Audrey, and Lorelei to Gleason Park Pool, which, even though it lacks a water playground, afforded the opportunity for Audrey to swim in her mermaid tail, which she had designed and made from shiny green scaly fabric at one of her sewing classes (lessons?) at Fairythimbles in West Melbourne. The mermaid was quite popular with the four and five-year-olds at Gleason! Another creation was a Pioneer-style dress designed from illustrations in the Little House on the Prairie books. Could there be a year or two as a Disney character in this young lady’s future?? 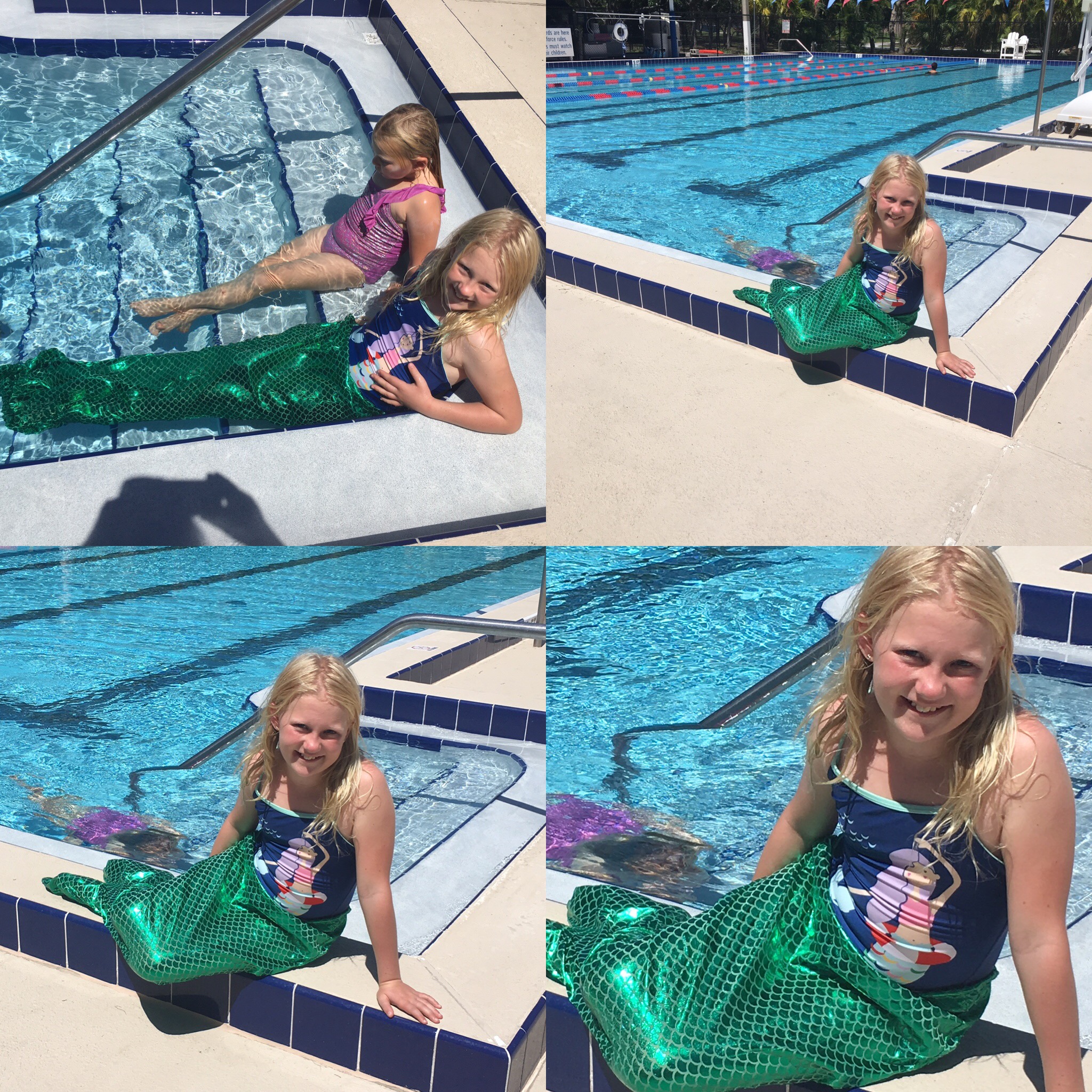 Several weekends saw sailing on the Banana River or the Indian River, often with cousin Will Olds, as well as both girls and their dad and their dad’s Papa. The sailboat carrying this merry crew was Papa’s sailboat, Eumelia, a 24-foot Columbia, veteran of numerous storms, dating from 1968. As soon as school was over for the summer, Will’s parents, my niece, Melissa, and her husband, Mark Olds, would bring Will, their 8-year-old son, over to our place, where the Eumelia is docked out front on one of The Pines piers, for sailing instruction on Saturday mornings. (Jack Olds, age 6, would go on another errand with a parent.) After the young Champnesses arrived (July 17) it became the custom for the Champness cousins to go along. On other days, Jacob would go out with Chris or Chris and Jacob would take Audrey and Lorelei out. 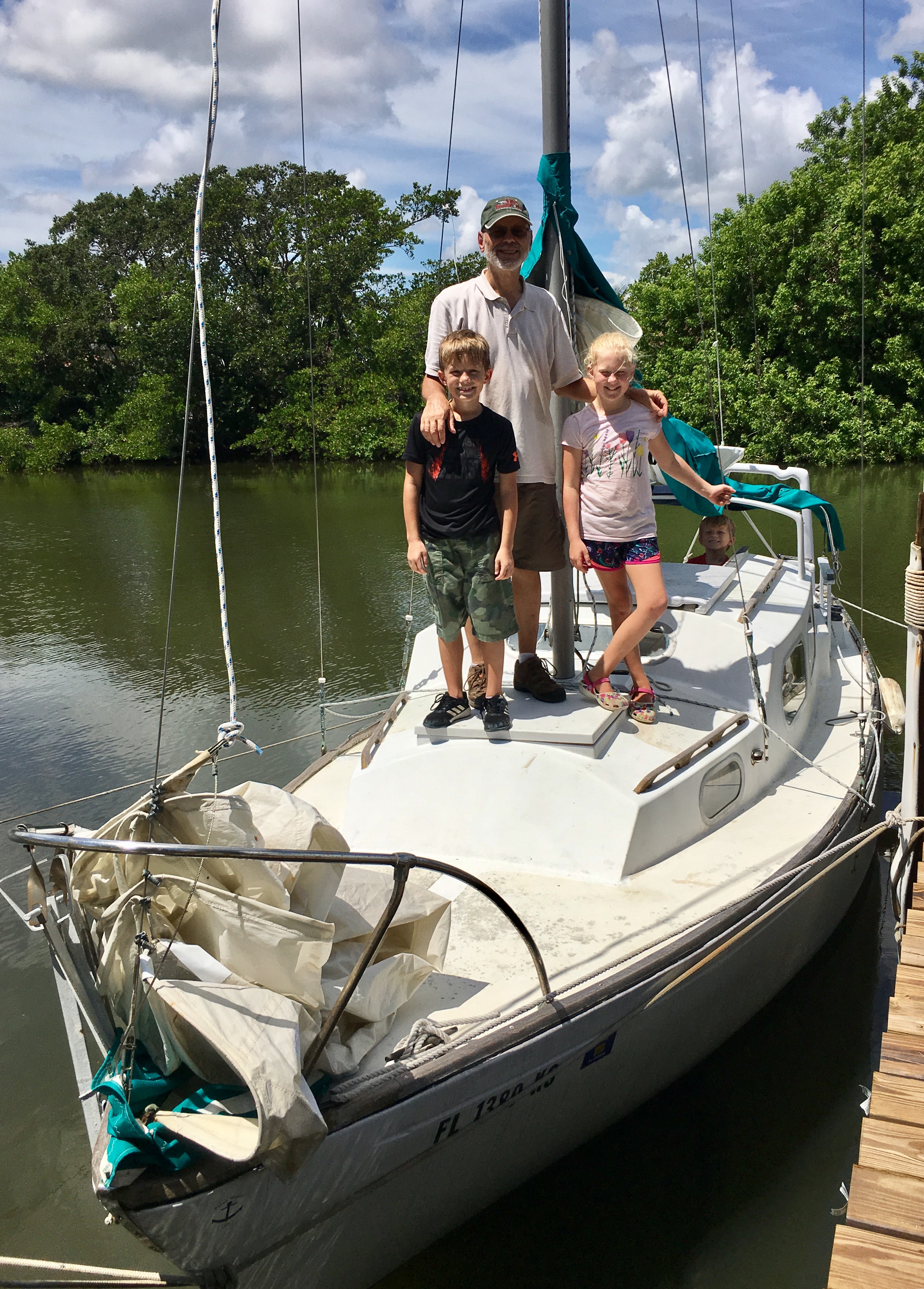 Papa with his crew 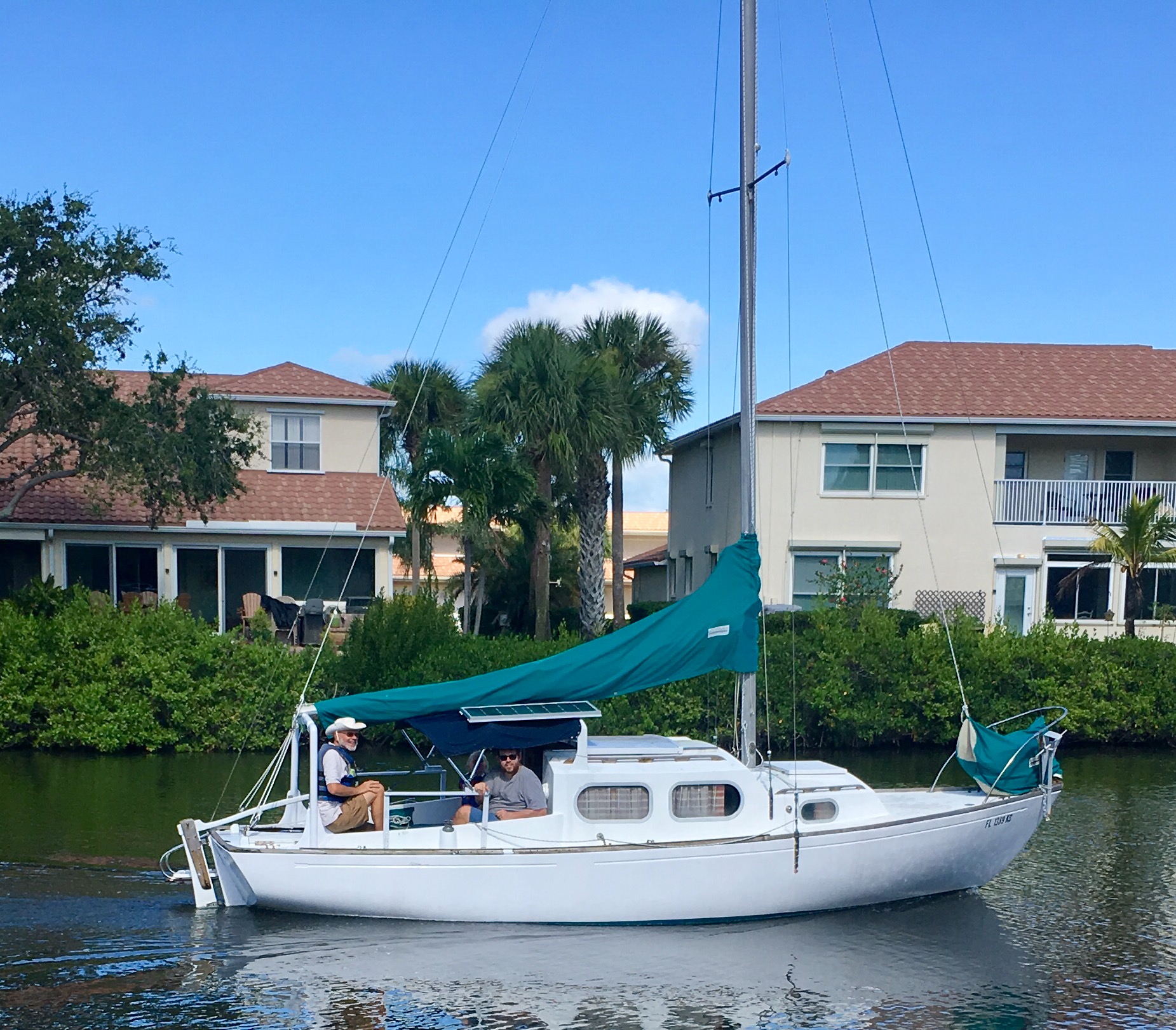 Another aquatic nature trek was by kayaks. The older Champnesses have two standard (adult) sized kayaks and the younger Champnesses had brought along the girls’ kayaks. It became noticeable that Audrey is quickly outgrowing her kid-size kayak! Papa and Jacob had several opportunities to go paddling with the two girls, and on the first outing, were joined by several dolphins! 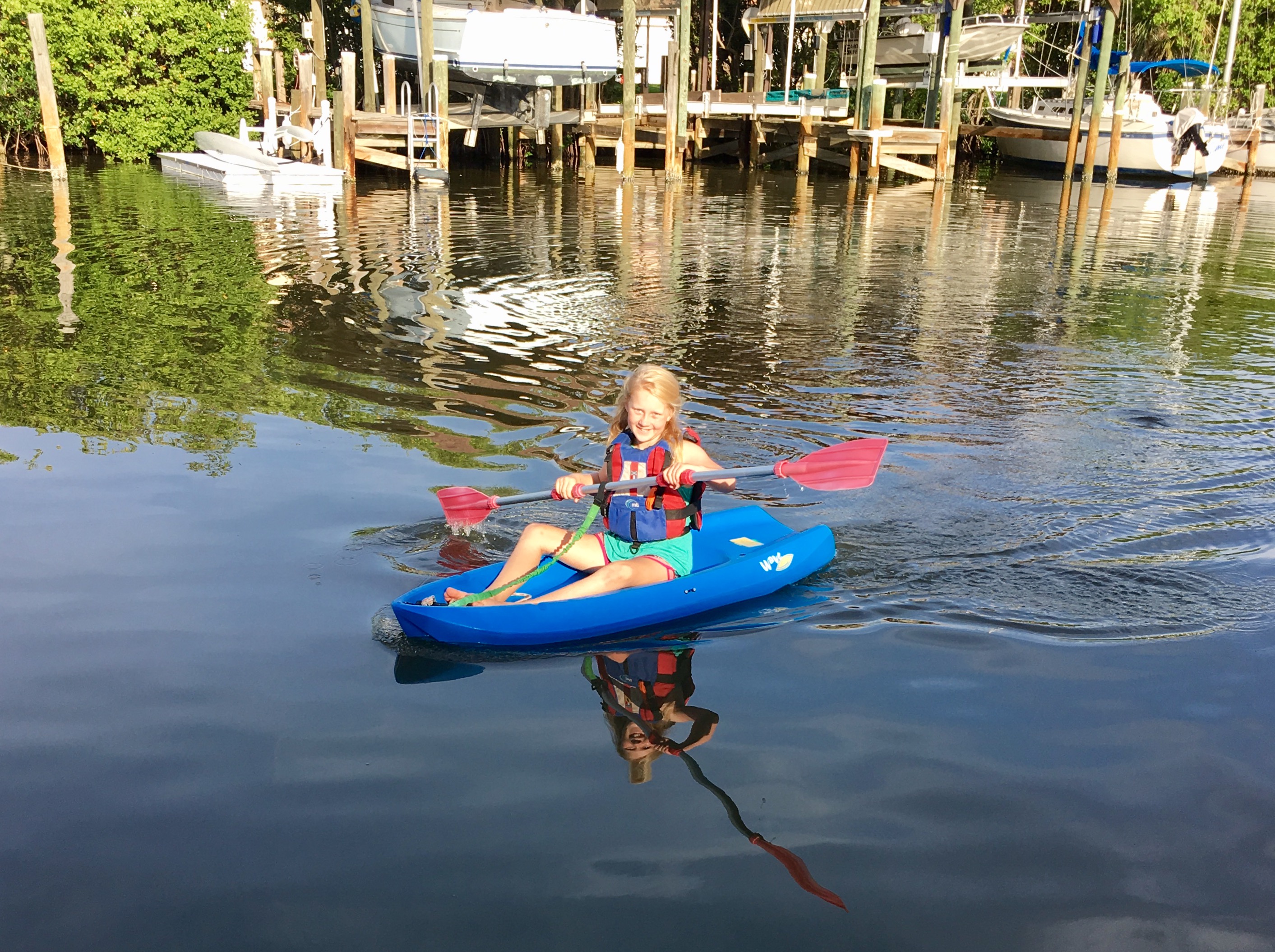 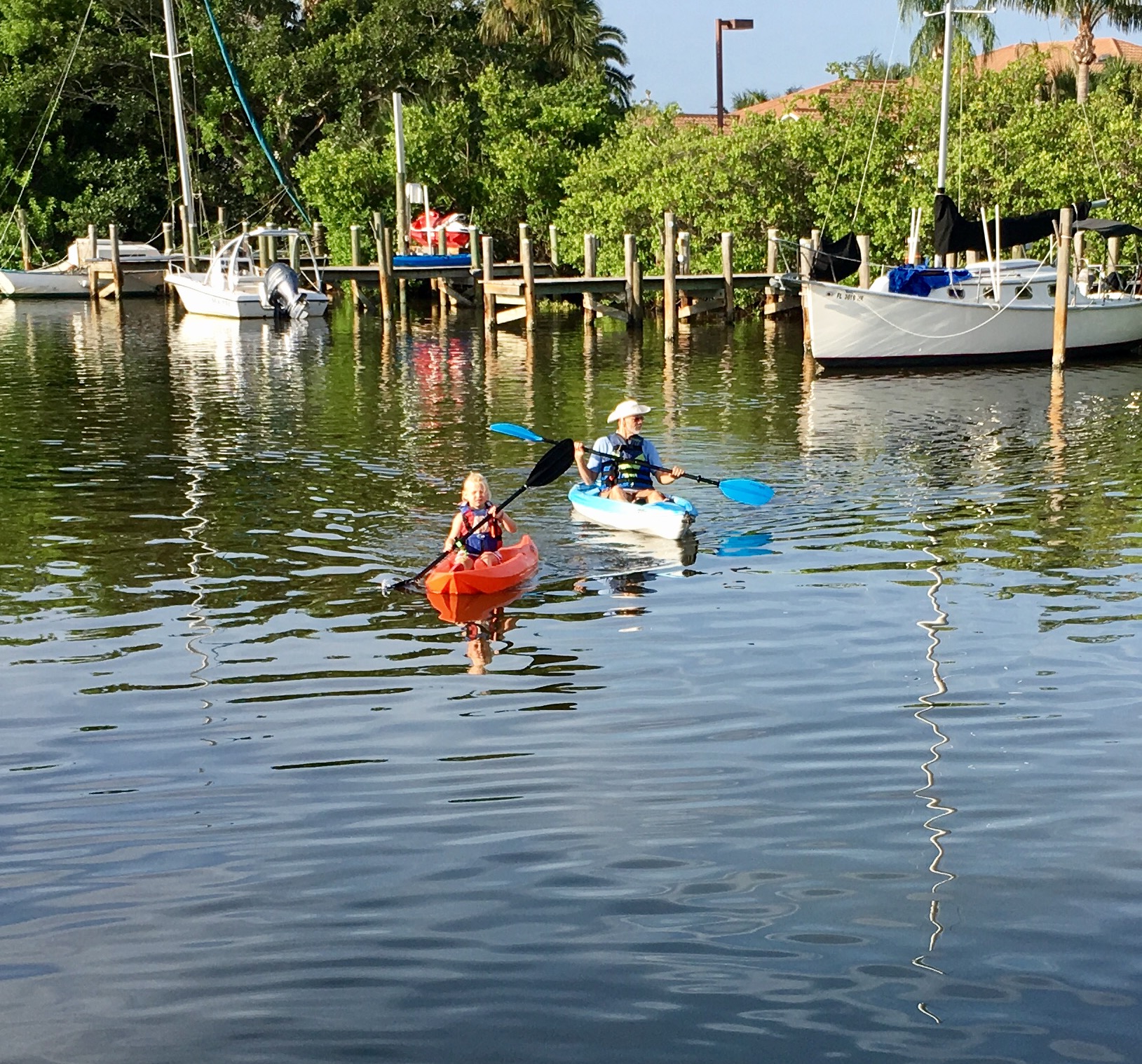 Other aquatic life drew repeated visits to the largest of the ponds here at The Pines. One evening Papa and I went over with the young Champnesses, who had some dry bread to feed the turtles who lurked in the pond: literally dozens of them, several different kinds, painted, red-eared slider, and the ferocious Florida soft-shell turtle.Ferocious or otherwise, they all go after dried bread! While we were watching the girls feed them, six or eight Wood Storks came gliding in from the southwest and took up perches in several of the stately old pine trees from which The Pines gets its name. They were there for 15 or 20 minutes, somberly overseeing our turtle-feeding. Then, just as quietly and mysteriously as they had arrived, off they glided into the southern sky. 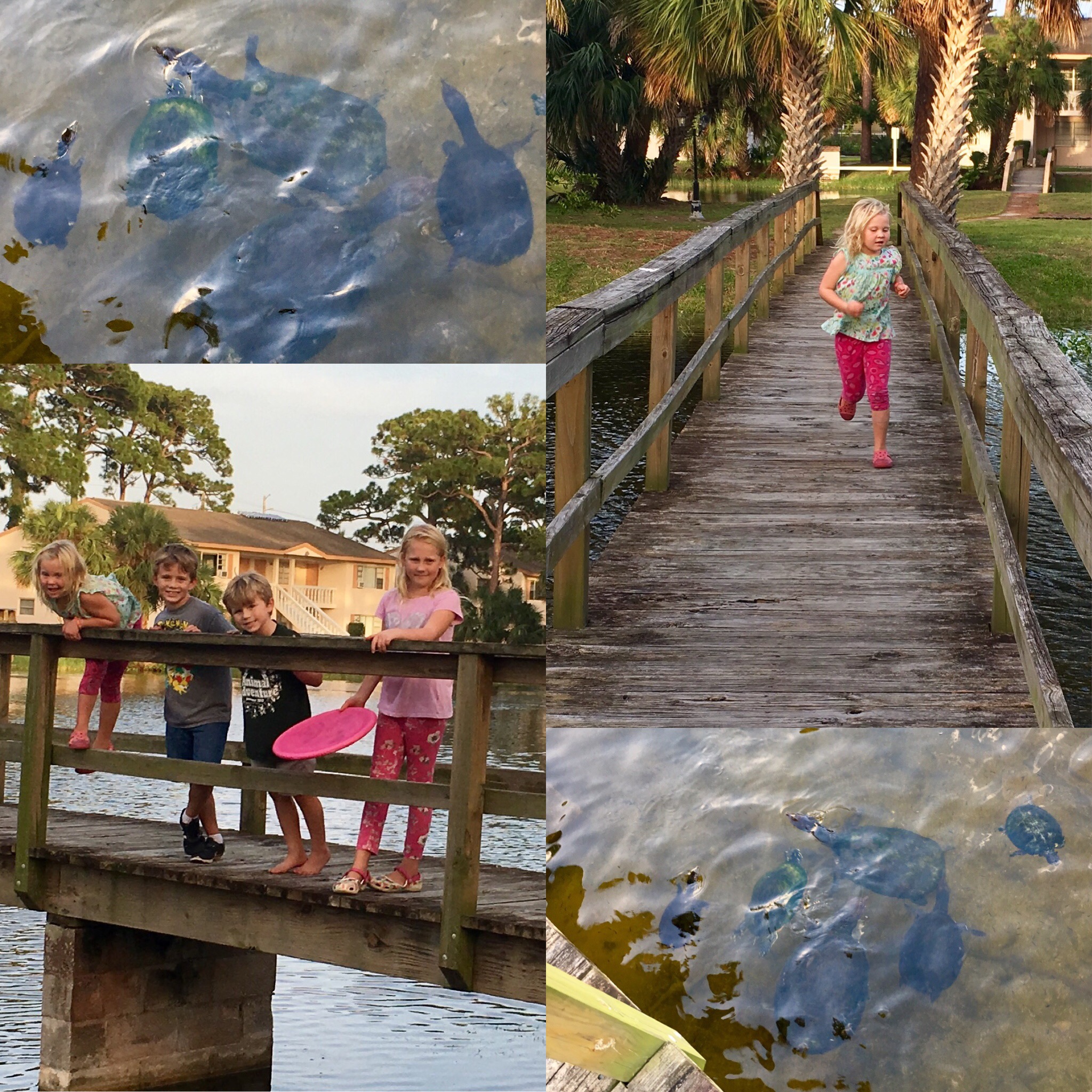 One of the star attractions of a visit to the Melbourne area is the opportunity to hang out with the boy cousins, Will and Jack Olds. Their parents are Mark and Melissa Olds, Melissa being the really truly cousin of Jacob. That makes Will and Jack some kind of incalculable degree of cousins to Audrey and Lorelei, but who’s counting? We just call them all cousins. Anyway, the first opportunity to see the cousins was Will’s regular sailing lesson at 9 am on Saturday morning aboard Eumelia. Papa and Will were joined by Audrey and Lorelei, and when they came back it was 11am and everyone was hungry. It was decided that we would go over to Doubles for lunch, all ten of us. But first, we stopped off to offer affectionate greetings to Great-Gramma Nornor at her little one-room apartment across the way from the older Champnesses. She was bemused and delighted to have her little space filled with ten family members! 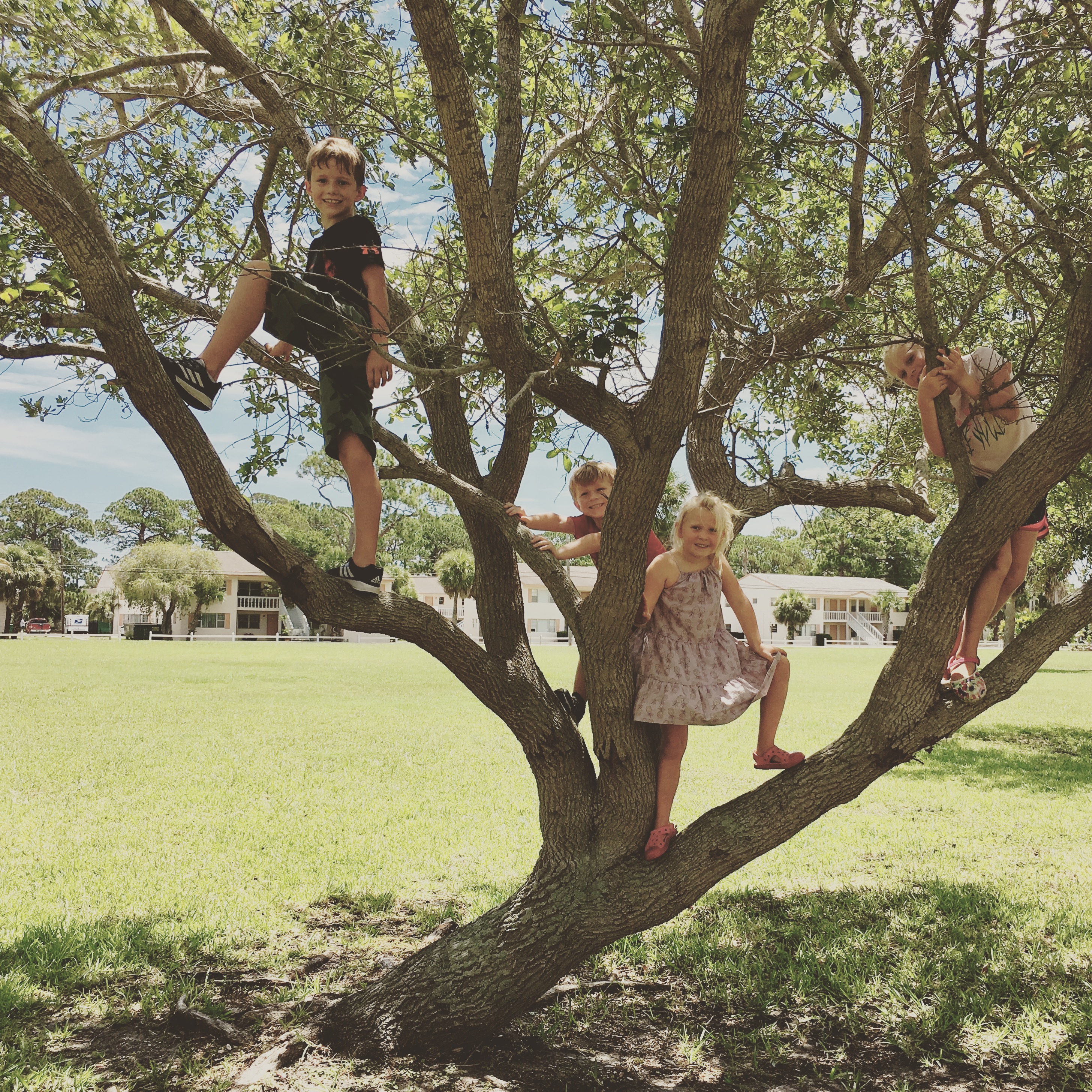 This occasion led to a plan for April, Audrey, and Lorelei to meet Melissa, Will, and Jack at Legoland the next Thursday. A fun time was had by all, and nobody seemed to mind re-applying sunscreen three or four times! 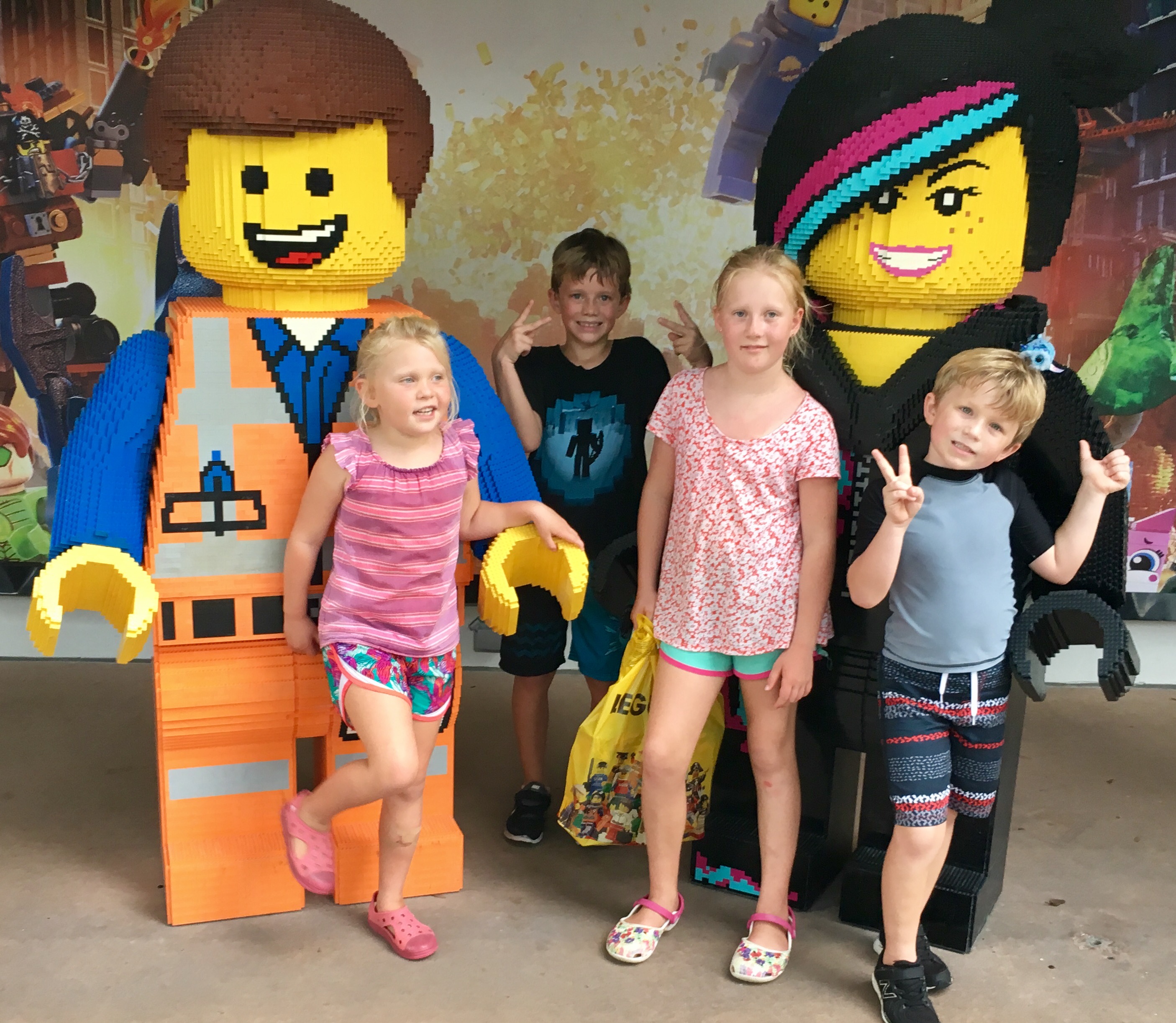 Other special outings took the six Champnesses to Coaster’s, where the favorite seats in the Biergarten were a little too wet, but a good time awaited inside. Then there was dinner at Edelweiss, where we strategically arrived at a little before six and were rewarded with good seats at the family table in the corner. We enjoyed several visits to Doubles, right nearby, as well as Long Dogger’s in Satellite Beach. The last morning of the Great Summer Visit of 2017 we went to breakfast at the Beachside Cafe in Indialantic, where April and I enjoyed the Eggs Benedict with bacon and avacado-yum! 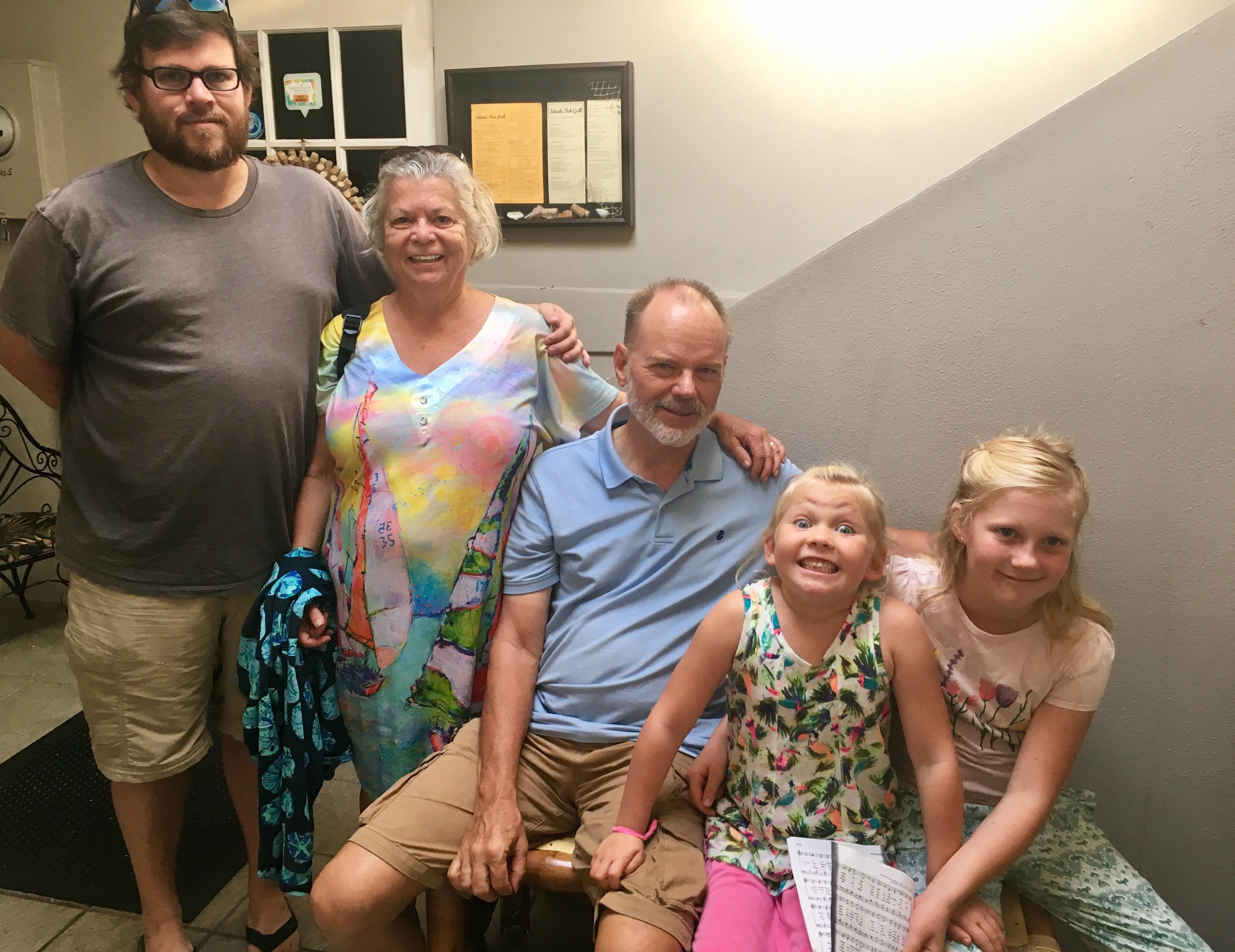 Last morning of the trip 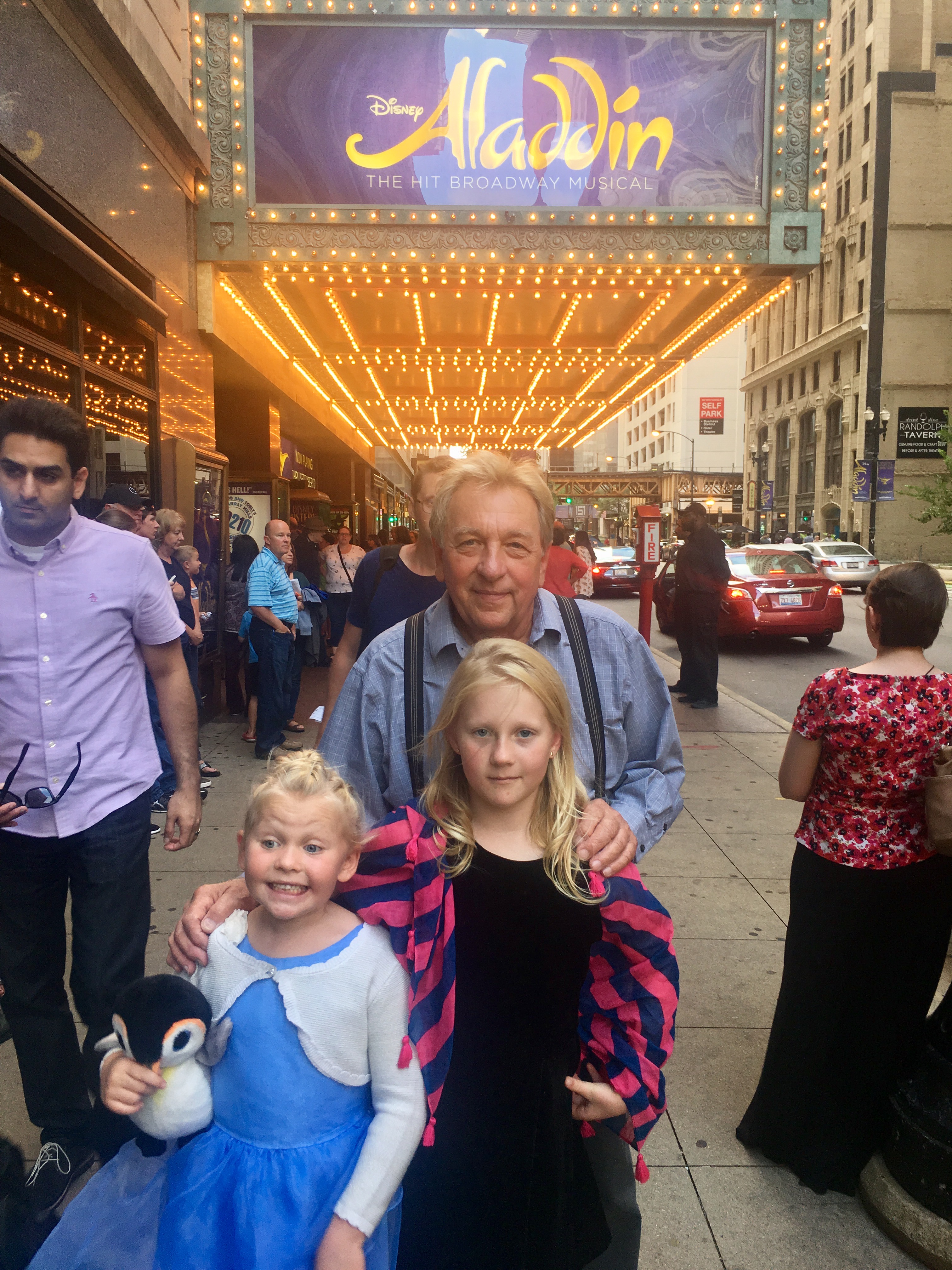 Broadway in Chicago by Audrey 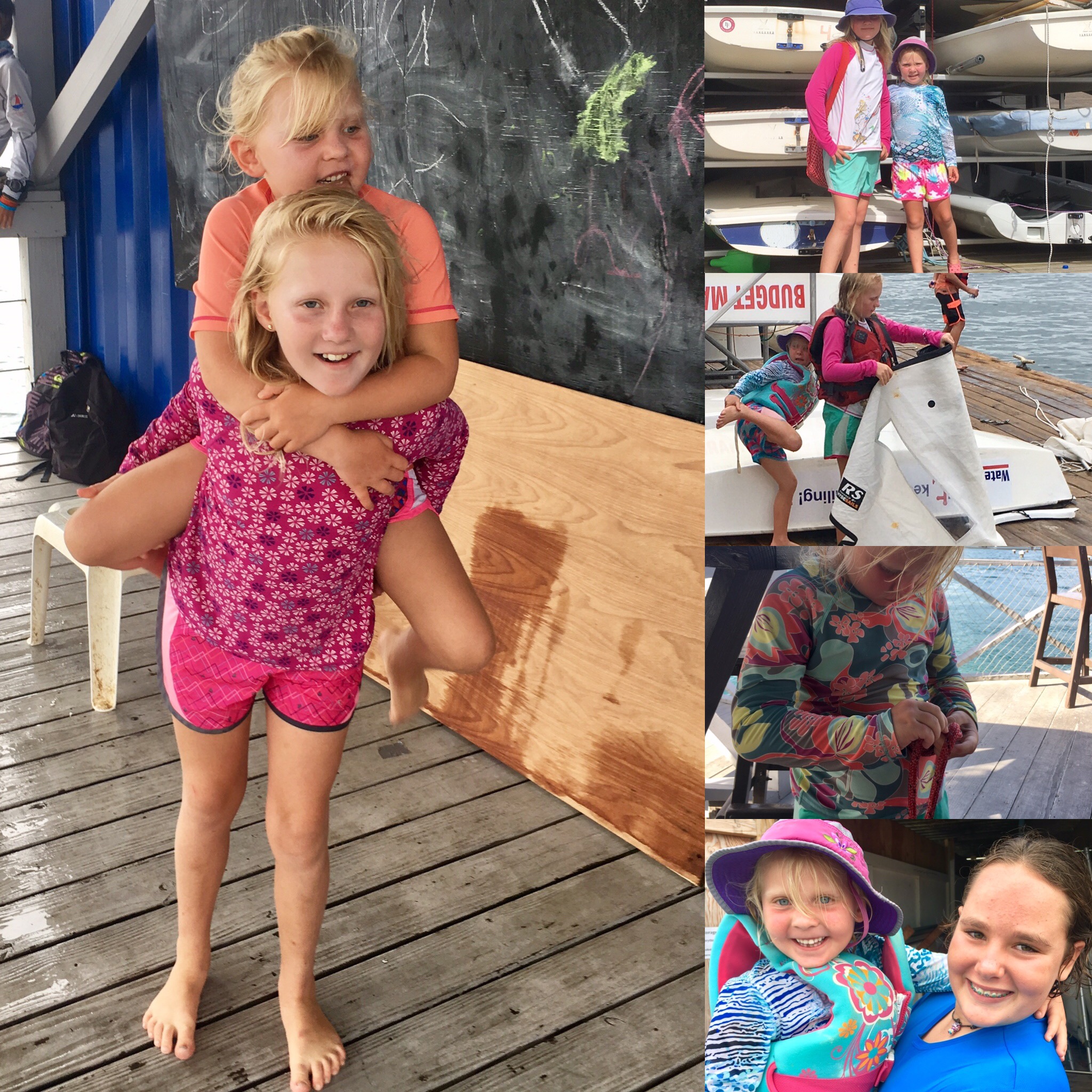