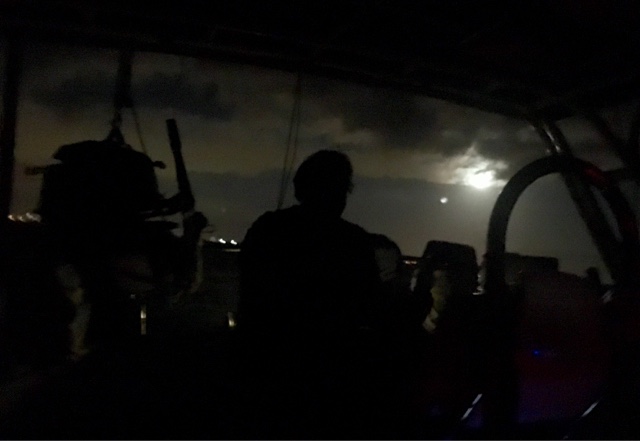 We crossed from Lake Worth Inlet to West End, Grand Bahama on Sunday 2/21/2016. It was a bumpy ride. Chris Parker’s comment as of Saturday afternoon was, “N Route should be sufficiently mild for most E-bound travel Sun21…” It was bearable, but definitely took it out of us.

We moved out of Riviera Beach Marina Saturday afternoon and anchored in 25 feet of water next to Lake Worth Inlet that afternoon. It was only once Lark had settled against the rode that I noticed that we were sitting in the middle of an continual boil about 50 feet across. It seemed weird but I figured it was just some anomaly of tidal current and didn’t give it much more thought. We all headed to bed early. April and I got up at 2:30. After completing the last couple items on our departure checklist, we fired up Perky and went to weigh anchor. 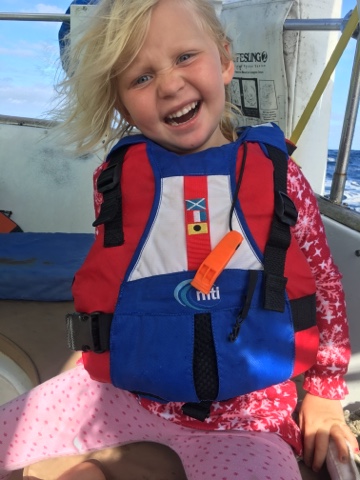 The darn thing wouldn’t come up, and it gradually dawned on me that it was hung up on something below us, which I feel must have had something to do with that boil. I was ready to give up crossing that day at that point. I wasn’t prepared to abandon $1500 worth of ground tackle and go to the Bahamas with nothing but a Fortress on nylon, and I couldn’t imagine how we’d be able to get our chain and Rocna loose when it was so deep and in the middle of the night. April maintained a level head though, and said the we should try just circling the spot. We did that and the whole thing came up smoothly. Good call, April!

We finally transitted the inlet at 4. Outside the jetties, things were a little lumpy, but still basically smooth. It wasn’t until we entered the Gulf Stream, just before 6, that it really got pretty bouncy, and it stayed that way until about the last hour. Not until about 8:15 did we finally lose sight of the last the building behind us. 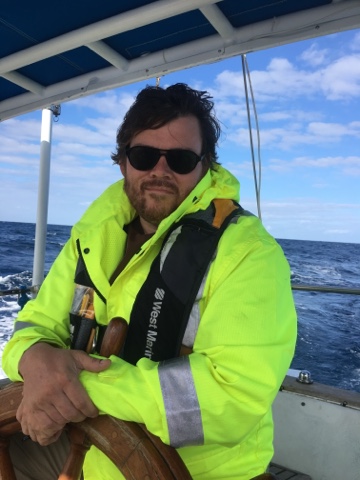 Initially we steered for 20 nm south of Memory Rock, estimating that we’d be spending about 10 hours crossing with an average set of 2 knots. About halfway across, beat up as we were, we decided to go to West End, 15 miles south of Memory Rock. At that point we altered course another 5 degrees to the south and figured we’d just have to deal with any further southing it required on the far side. It all worked out in the end with no significant correction.

For five and a half hours we were out of sight of land. We saw a big Coast Guard Cutter, a couple large freighters in the distance, and 5 or 6 other sport fishers, trawlers, and sailboats thoughout the day. Our first sight of land was the water tower at West End at 1:45. It was beautiful to tie up and shut off old Perky. I believe there’s a quotation to the effect that two of the greatest pleasures in sailing are to leave sheltered waters for the open ocean, and to arrive in sheltered waters from the open ocean. 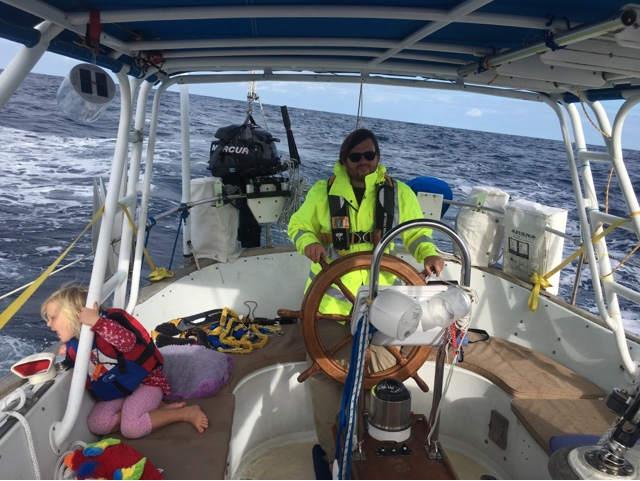 We’d had wind and seas directly on the bow for the entire crossing. We motored the entire way and averaged about 5 knots. After 12 solid hours of continual agitiation with no vacuum problems I can finally say with complete confidence that our fuel does not have chunks.

It was a great adventure, and we learned a lot how much we and Lark could take. 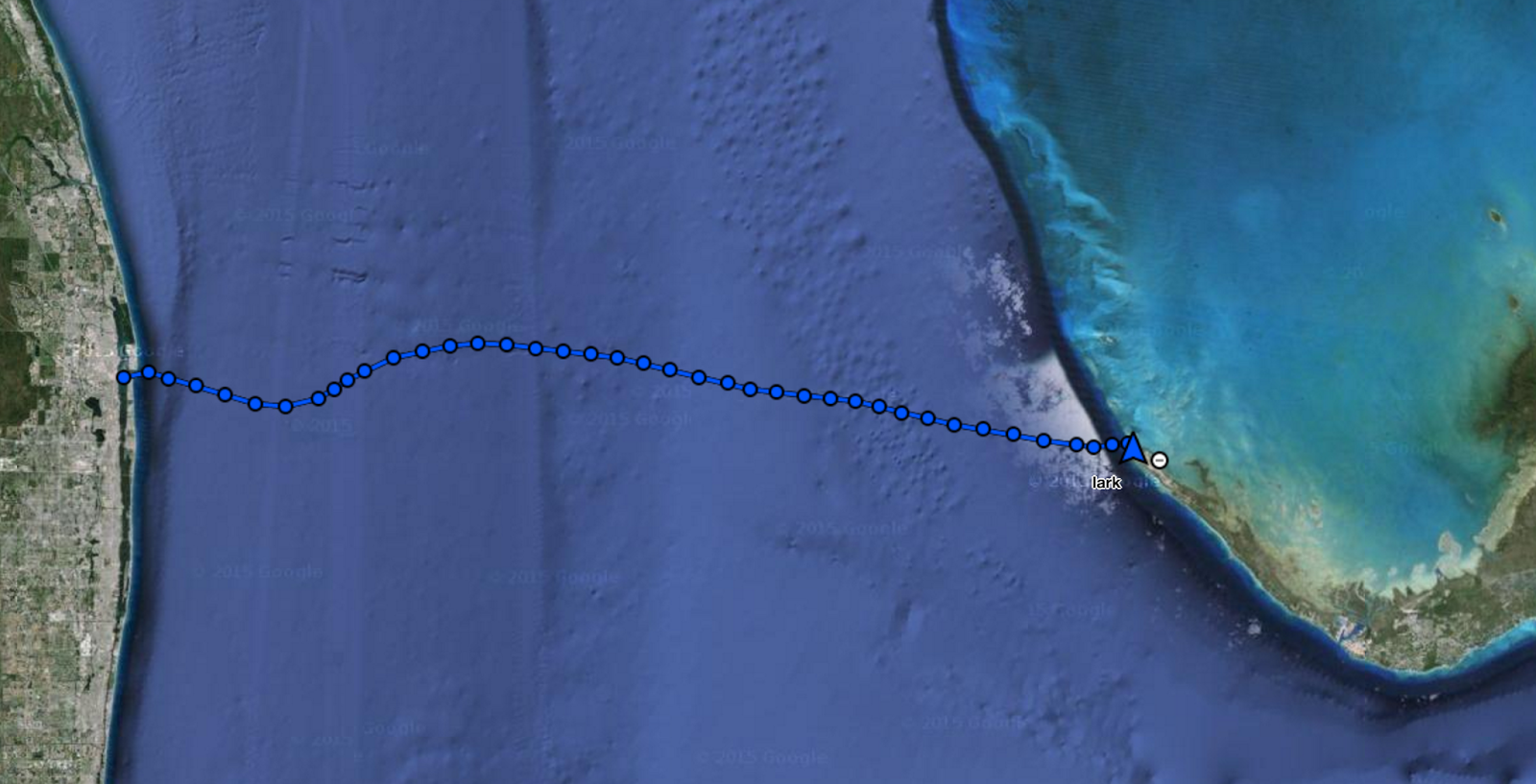 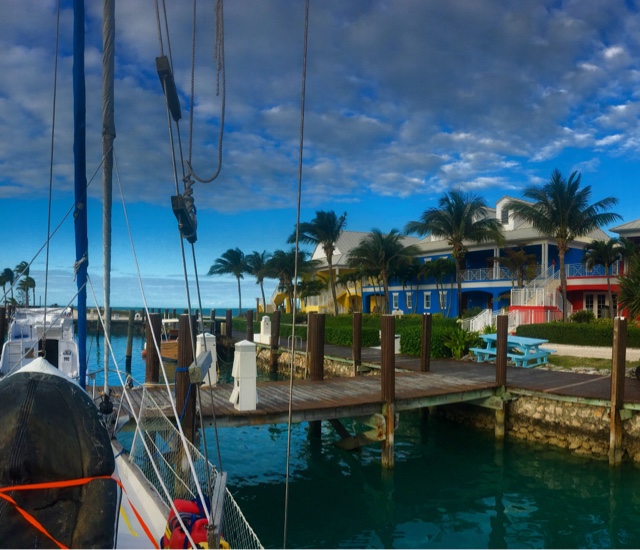