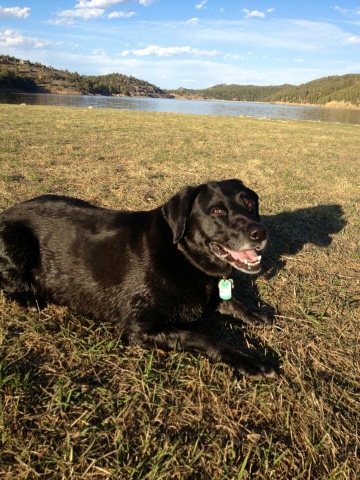 On Friday morning April, Len, and the girls took Sweet Pea for a nature hike. She was happy and playful. Later in the afternoon Len walked her and she seemed to be dragging and disoriented. At about a quarter to 6 I was working aboard Lark and April called to me to come out and see what was wrong with P. Len hadn’t been able to talk her into walking out the finger pier to load up onto Lark and she was lying in an awkward position on the dock. I came out and couldn’t coax her into standing on her own. I picked her up and set her on her feet and she walked around stiffly and unwillingly. She was dragging both hind feet with each step. We considered taking her to the vet but as we walked to the car she seemed to be doing better so we decided to wait. She hated vets’ offices and we didn’t want to make her go through it unnecessarily. When we couldn’t even interest her in a piece of salami for dinner I knew something was definitely wrong. We decided to have her spend the night at Len’s room rather than have to deal with the finger pier and the companionway and all that. I wanted to sleep next to her because she’s always happiest with one of us around, so I stayed on the couch with her in the living room. About 2 I woke up because she was breathing loudly and with difficulty. I called April to come see what she thought. I went to the boat and she came to the room. We discussed that I might take her to the vet if it continued and April had a chance to say goodbye to P. We traded places again. When I got back, her breathing seemed easier and again, I didn’t want to put her through a visit to the vet unnecessarily. I pet her and talked to her a little then let her rest. I lay awake for a long time. I don’t know what time I fell asleep, but I woke up at 5:58. It took me a minute to realize that she had gotten up and gone to the edge of the carpet. She was lying there now. It occurred to me that she didn’t seem to be in a very comfortable position. That was when I first thought she might be gone. I put a hand on her back and she wasn’t breathing, so that was that.

Sweet Pea had arthritis in her hips and had been slowing down for the past two years. About 3 months ago we discovered that she also had a neurological problem that affected her hind legs. The vet thought it was likely that she had a tumor on the end of her spine, but because of her advanced age he didn’t recommend removing it or even doing the testing to find out for sure as it involved anesthesia. We knew that if it was a tumor we had less than six months with her.

For some reason we took two cars in to Anchorage the day we were picking up Sweet Pea. Her mom lived in Eagle River, so we went up there to pick her up. She rode on the passenger seat of my Cherokee back to Girdwood. She was so small that she fit completely on my forearm with her head in my hand. We stopped for ice cream at The Shop in Girdwood. We sat out in front with our ice cream and she insisted on sitting directly on my feet. (j) 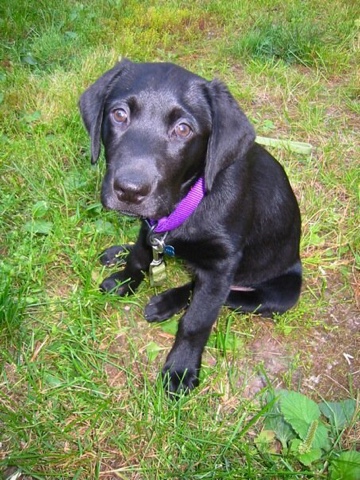 Her first night with us was her first night away from her mom and brothers and sisters. She didn’t like it at all. We put her in a small pantry in the apartment with her kennel and a pee pee pad. She cried and howled all night long. Somehow she managed to poop on the wall. The downstairs neighbor was not at all amused with the racket. (j) 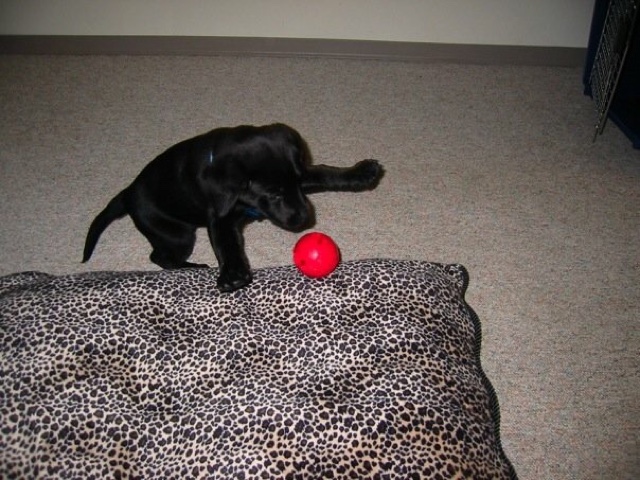 Soon after she came home with us the three of us went out for a walk after dinner . We had only been in Alaska a couple months ourselves and had yet to get used to the long summer days. We kept exploring further and further before we suddenly realized it was 10 at night and we didn’t know exactly where we were. We did eventually come out to a road and found ourselves on the wrong side of Winner Creek looking across at our apartment. Just then some kind of stinging insect stung P on her eyelid. It started to swell up and we started to freak out. Rather than walk with her a mile down to the bridge where the road crossed the creek and the mile back up to the apartment, we decided that April and P would wait there while I forded the stream and came for them in the car. It was a little scary because we’d heard about how the freezing glacier melt and strong currents could be very dangerous, but I went for it anyway. It was waist deep and incredibly cold but I was fortunate not encounter any dangerous currents. We had P in the car within 20 minutes and decided to take her the 40 miles up to Anchorage to see the 24-hour vet. By the time we got there the swelling had completely abated so we turned around and went home. (j) 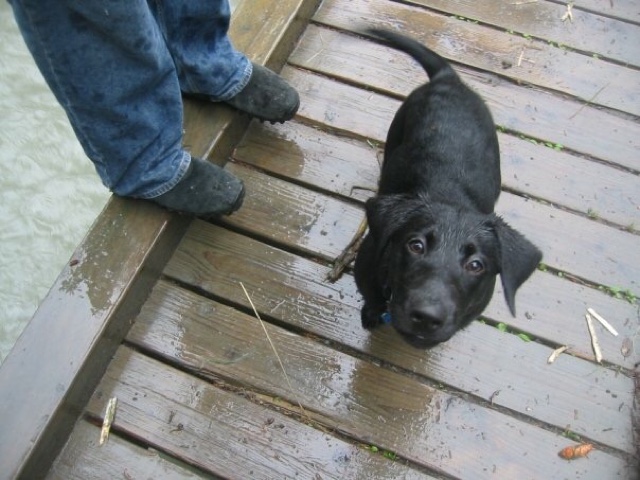 She had a taste for dog poop as a puppy. We wanted to break her of it and read somewhere about shaking Tabasco on poop before she found it to make it an aversive experience. We tried this, but she seemed to like it better that way. She eventually outgrew the habit on her own. (j) 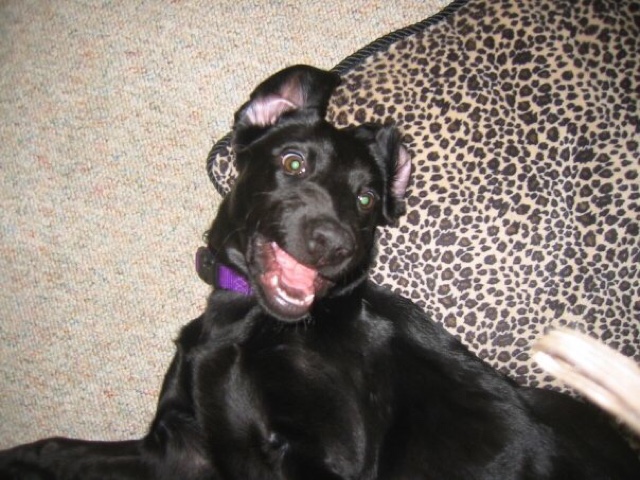 Once we moved to Anchorage, April, P and I got into the habit of hiking Blueberry Loop every morning in the summer. One morning, as we came around the side of the mountain she spotted a moose calf and thought it would like to play. She started chasing it all over the mountainside. We thought she was a goner for sure, but the mother never showed up and P eventually came back to us unstomped. (j)

She was a pretty rascally puppy. She hadn’t learned to be the amazing listener yet that she would eventually become. Once when I was walking her around University Lake in Anchorage, which was half dog park, half jogging trails, a jogger stopped to tie her shoes and set her gloves on the ground. Sweet Pea ran up and grabbed one of her gloves (she always has had an affinity for gloves) and took off. She would not come back to me for anything! I tried calling, begging, chasing, luring with a tennis ball…finally, half an hour later, I asked the woman if I could borrow her other glove and lured Sweet Pea back with that. It worked! I was so embarrassed handing her back one frozen slobbery glove, and one normal glove! I didn’t even have my wallet with me that I could hand her some money to cover it. (a)

Again once at University Lake, I was throwing a tennis ball for her, and it took a wrong bounce. I shouted for her to stop chasing it, and come back…just to leave it, but she couldn’t make herself do it, and leaped after it into an open hole of water in an otherwise frozen lake. The edges of the ice were so slippery that she couldn’t jump back out. I had to lie on my stomach across the ice and pull her out by her armpits. It was very exciting. (a)

Even with her puppy indiscretions, she was an amazing companion for exploring Alaska. She and I hiked daily, ran into moose, and took her swimming in the many creeks that ran through Girdwood. I was finishing graduate school when we first arrived and she would come with me to my class, wait in the car and afterwards we would explore Anchorage together. Mostly that went well, except for the couple of times she got nervous and chewed the car. (a) My Nissan still has her tooth marks on the parking break lever to this day. (j)

When we moved to Colorado, she wasn’t sure she liked it at first. The Colorado sun is intense! We started working on her therapy dog certification though, and then she started coming to work with me everyday. She loved that! All my clients loved it too. She was such a sweet empathic girl! When we had to quit work to go on bed rest, I think she was a little bummed, but she really took the job of looking after me seriously. I spent lots of time in bed, and she was always by my side. I was pretty lonely, and I think she could tell when I really needed her and she would lie down so close to me that I could spoon with her. (a) 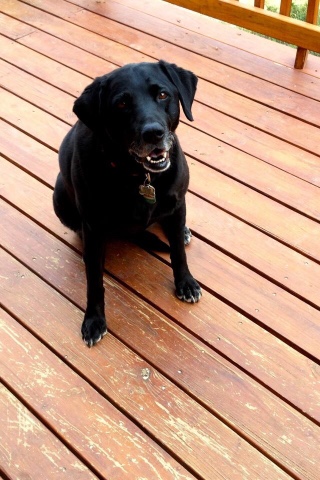 She didn’t really enjoy the way that the babies crawled after her and pulled her hair, but she still loved them. I think it helped that they were always willing to sit there and get as many licks as she felt like giving. She was always patient with them, and if they got too rough she would just walk away. (a) 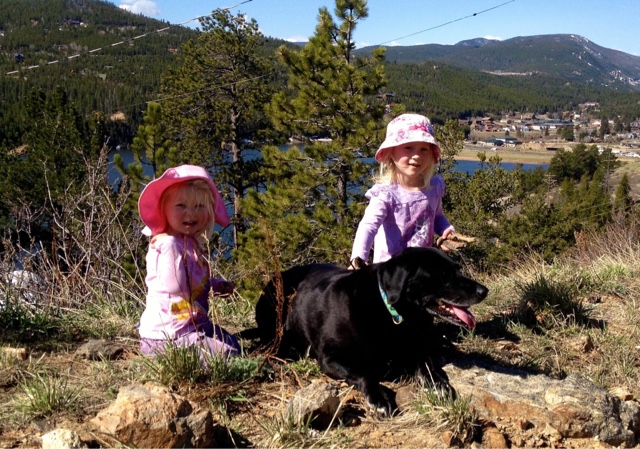 We had a great dirt road loop to walk on in Nederland. I took her every morning and evening and threw sticks and balls for her. She loved that. She really loved winter and the snow up there. The colder and snowier the better (j) 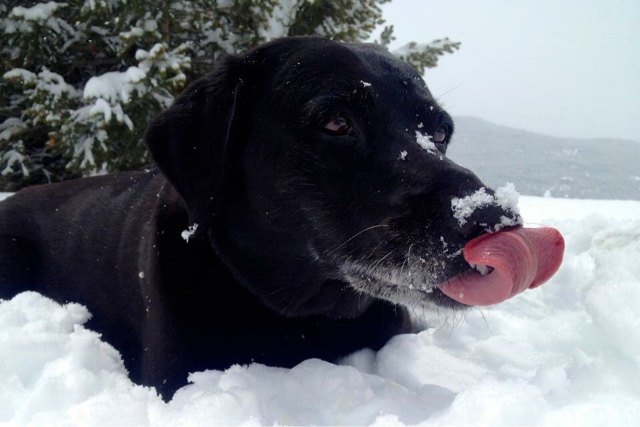 P was my number one hiking buddy. April, the girls, and Mom and Dad and Len all hiked with me at times, but P went on every single hike I ever took in the past 11 years – Winner Creek, Crow Pass, Arapahoe Pass, Gray’s Peak, Loveland Pass and countless others. (j) 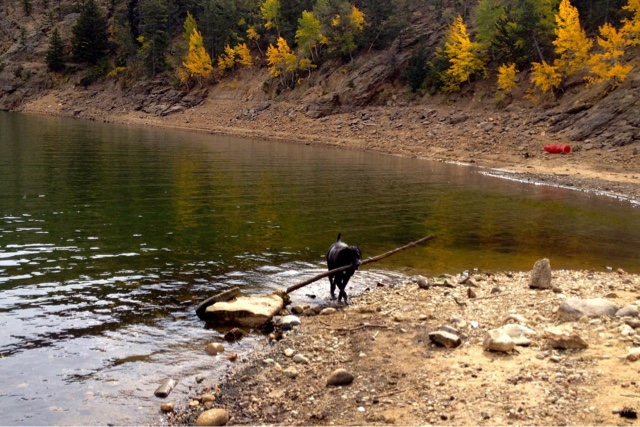 I had not been patient with Sweet Pea lately. She always wanted to be close to me or April on the boat. We were familiar to her in an unfamiliar environment. Every time I walked past the companionway she went halfway up the ladder, hopeful to go out. Every time I walked through the narrow space from the saloon to the aft cabin, she wanted to go through with me. Every time I finished walking her she wanted to take extra time before getting back on the boat to walk between my knees and have me scratch her butt, but I never wanted to take the time. I’ve felt so pressed for time between work, school, and boat projects that I just felt irritated to lose precious minutes on that. 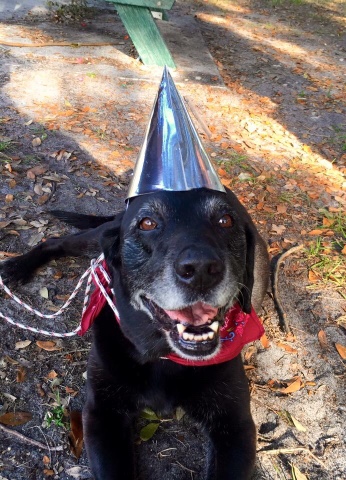 She gave us so many gifts. She gave us 11 years of unconditional love, and pure empathic response. She was obedient and selfless. She never snarled over food or growled at the girls for smothering her. She smiled often and licked voraciously. In the end, she gave me the gift of seeing the foolishness of my impatience with her for her limitations and for her appetite for my attention. I want to honor her by being more like her. More patient, quicker to smile, slower to snarl, happier just to bask in the love and companionship of my family.

We miss her so much. 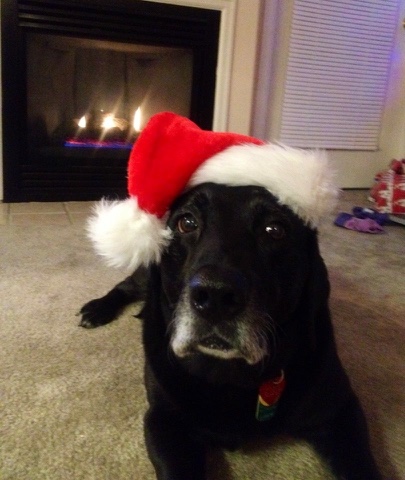 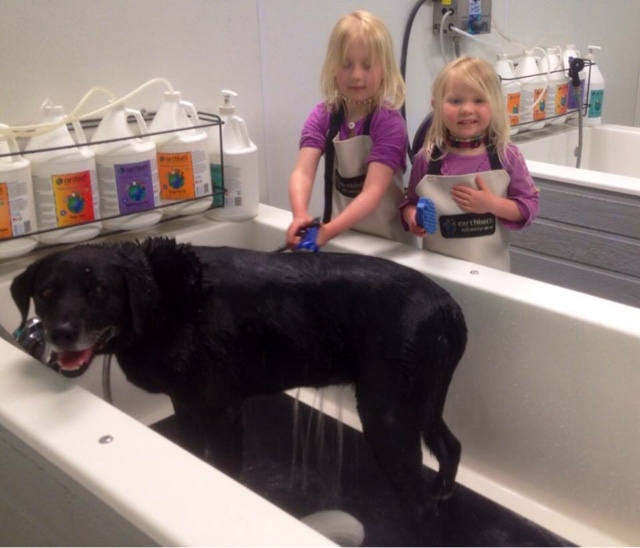 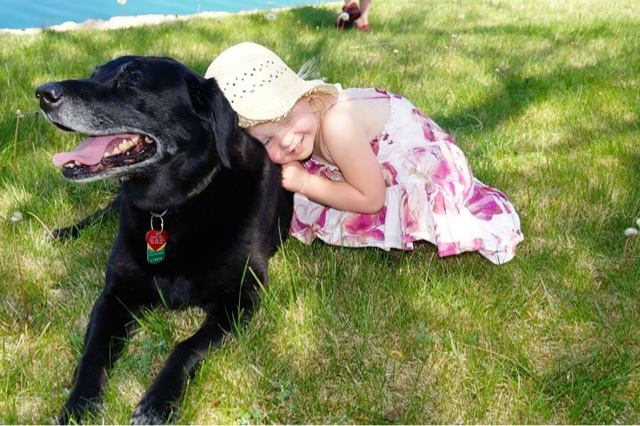 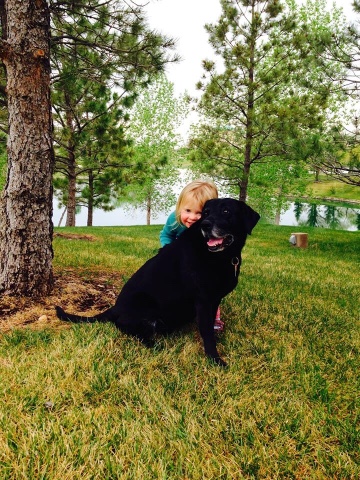 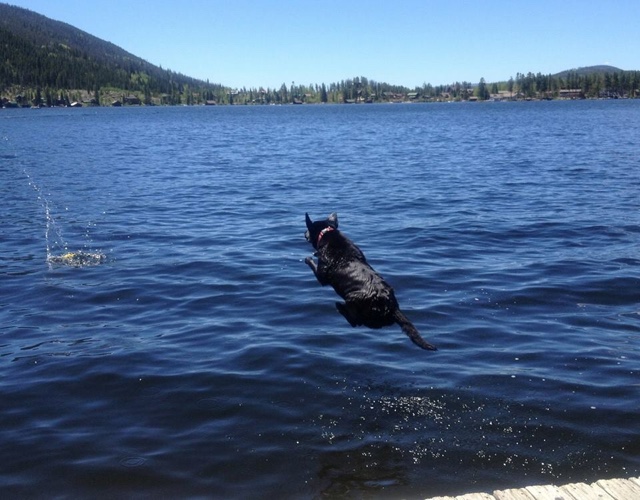 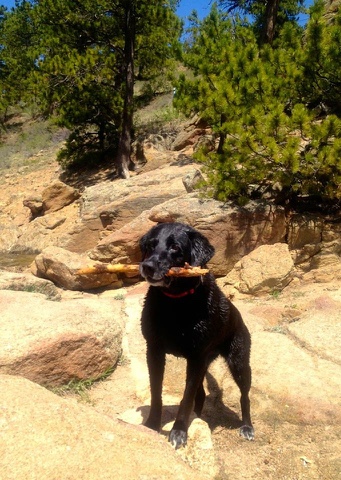 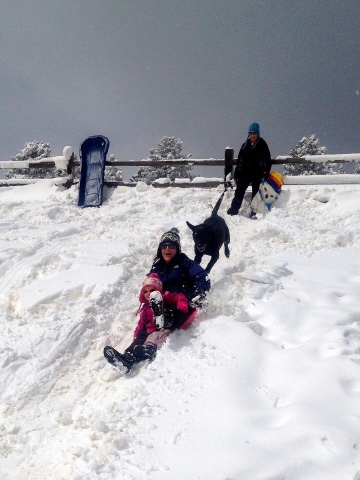 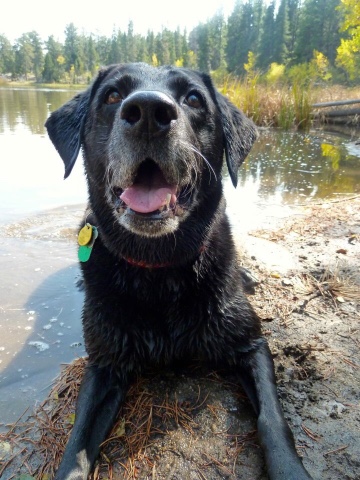 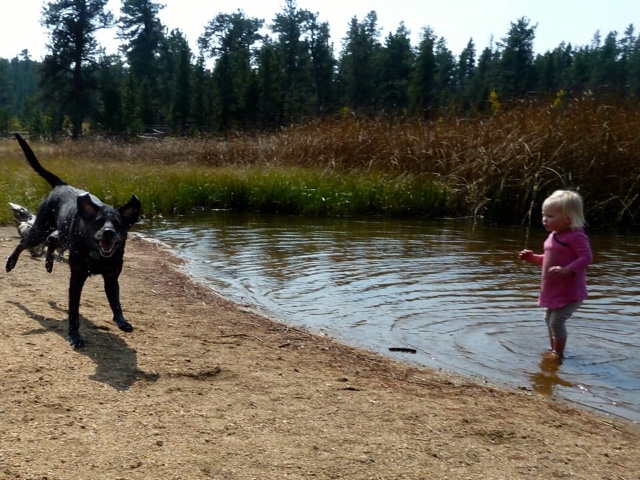 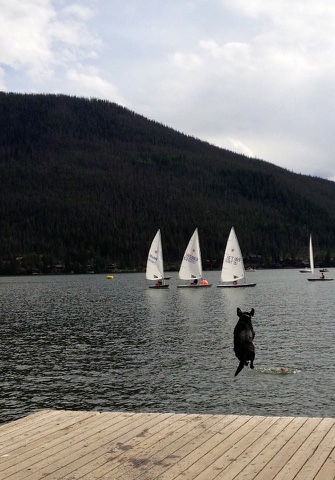 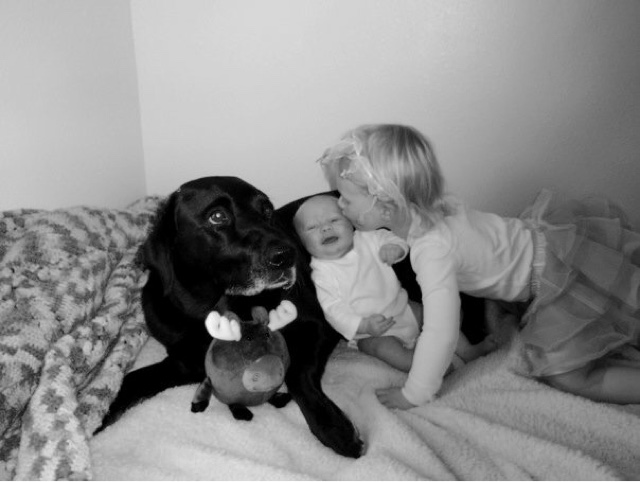 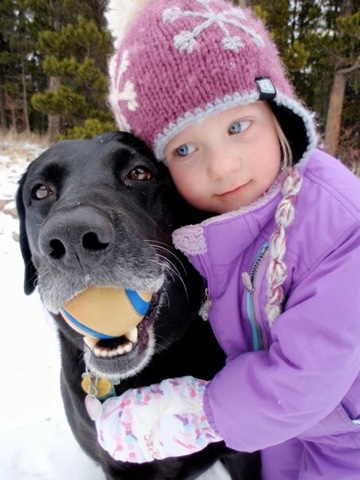 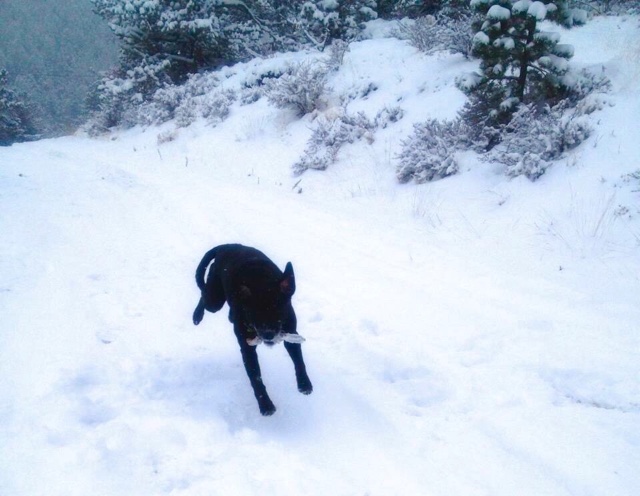 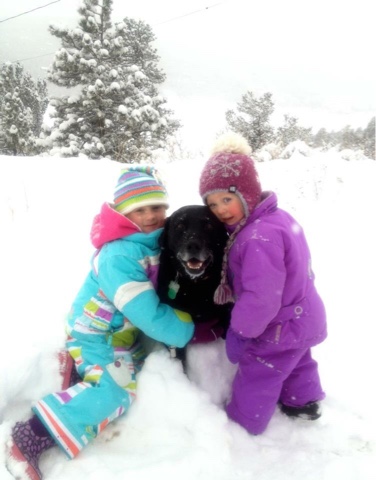 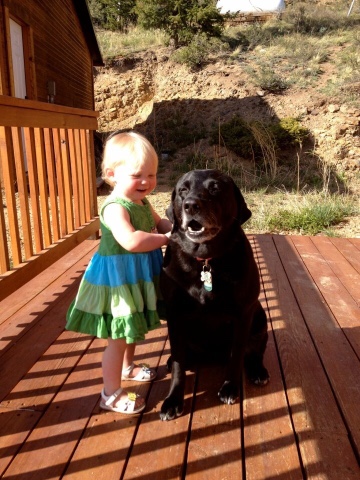 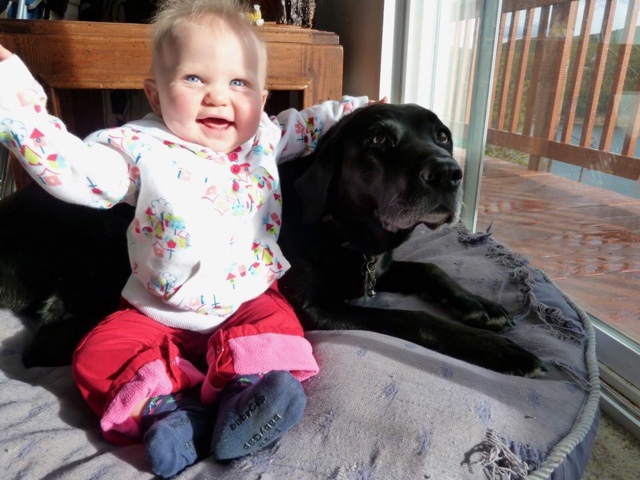 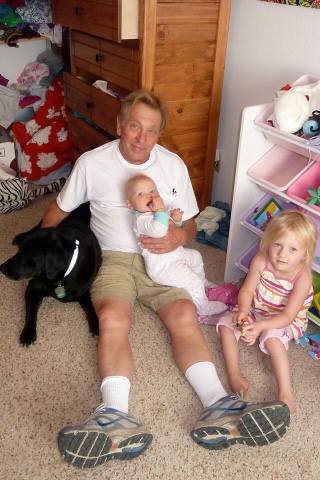 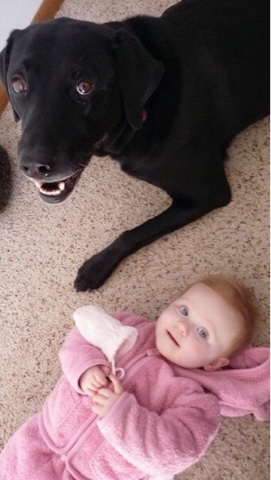