We left Key Largo at about 7:30a and made it about halfway to Marathon by 12p.  Because of our vacuum problems last week we were keeping a close eye on the Racor gauge, which ran right at zero for the first couple hours, at which point we began to feel more comfortable.
Shortly after noon, however, I noticed some fluctuations in rpms without anyone touching the throttle.  Something felt off so I checked the vacuum guage on the Racor.  It was higher than I've ever seen it.  I also saw that the squeeze bulb I'd added when I replaced the fuel lines in Key Largo was collapsed.
So there was an obstruction somewhere upstream of the squeeze bulb and all the fuel from the Racor at least as far back as the bulb had been sucked out.
Additionally, for the first time since before the fuel polishing, the Racor bowl was full of sediment and the filter was really dirty.
We threw the anchor in and called Towboat and they sent a boat to tow us the last 25 miles to Marathon.  It really was a marathon tow.
Just to keep things interesting, April spotted something a couple feet below the surface and about 25 feet back which seemed to be following or chasing us and exactly matching our speed.  We both stared at it for while until I finally realized what we were seeing.  It was crab pot we must've run over at some point.  We radioed the tow boat captain. He slowed and circled and after a couple tries was able to snag the line with a grappling hook. He brought it up and I cut it.  We were able to make another knot the rest of the way.
So now here we lie, tied up in a rather expensive marina, 12 hours after departing,  8 hours after throwing in the anchor, 5 hours after Towboat picked us up, and completely confused about our fuel system. 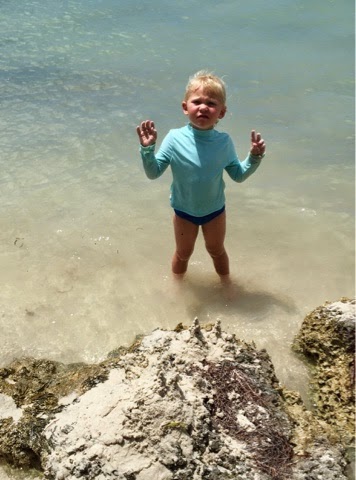