Over the weekend, we were eating dinner on the patio of a restaurant where there was a big lawn with lots of kids.  I was watching how Audrey was handling herself with a boy who kept harassing her playmate, and who eventually ended up hitting Audrey hard on the butt.
Now, it goes without saying that he brings shame on his parents, but that's not the point of my anecdote.
It's this: Rather than hitting him back, which I frankly wanted to do myself, she called after him, as he courageously ran away after hitting her, that he was "hideous."
It also goes without saying that she could have handled that a bit better, and we did have a talk afterward about how insulting people is not a good way to resolve differences, but really, I was mostly just bursting with pride that she pulled out "hideous" in the heat of battle. Thank you, Ogden Nash.
April got this wonderful book of poetry and Audrey's going to be in charge of making selections for us all to learn each week: 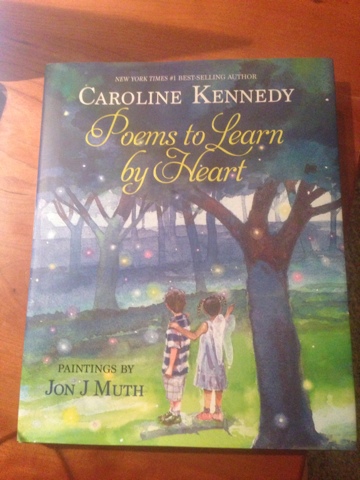