It's been a challenge, but we are finally really getting into the Christmas spirit around here! I love Christmas, and normally like to start the preparation as close to finishing up Thanksgiving as possible. Every year I make a new set of christmas CDs for my car. Unfortunately, my computer was destroyed last year right after Christmas, and I still haven't gotten all my music onto the one I'm now sharing with Jacob. After many hours studying itunes tutorials, and downloading new software though, I was able to download a few CDs that I had already purchased last year! Yeah me! I also bought a new kids Christmas CD by Laurie Berkner. It's very good! The girls really like it. Jacob's current favorite Christmas song is Christmas Island, we can tell where his head is at :). 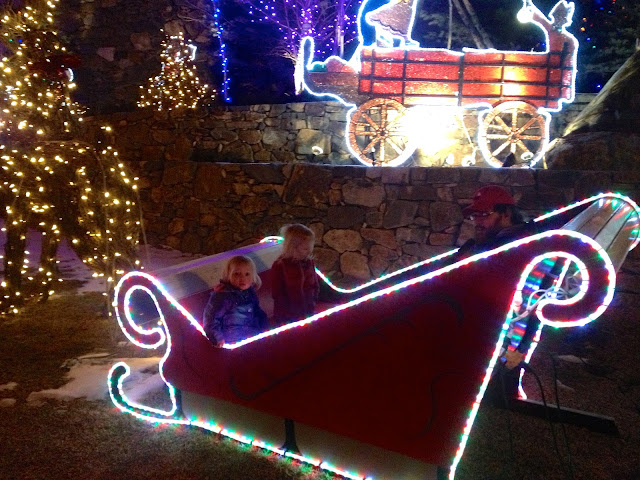 Jacob and I have had a fake tree ever since we tried to keep a cute little potted tree (Albert the Alberta Spruce) over Christmas while we were living in Alaska. Albert died way before Christmas, I'm still not sure what we did wrong, and I was really sad about it. It was probably a mixture of having named him, being away from our family that year, and watching something die. Ever since, I have not wanted a live tree. Last year our fake tree died (lights went out and big branch broken), so the plan was to get a new one from Costco this year. Unfortunately, by the time I got there they only had the giant $650 trees left. In the parking lot they were selling what they advertised as 6.5' trees for $40 bucks though, so we are trying a real tree again. After getting the tree home though, we realized it was way larger then 6.5' because it didn't fit in our house. Jacob had to saw the bottom and the top, and it is a MONSTER! It takes up a really large amount of the room. Watering it is pretty crazy too! One of us has to army crawl under the thing and use a special pumpy thing we bought to water it. Having a real tree is a lot of work! One huge perk though, the house smells awesome, and the girls had so much fun decorating it. 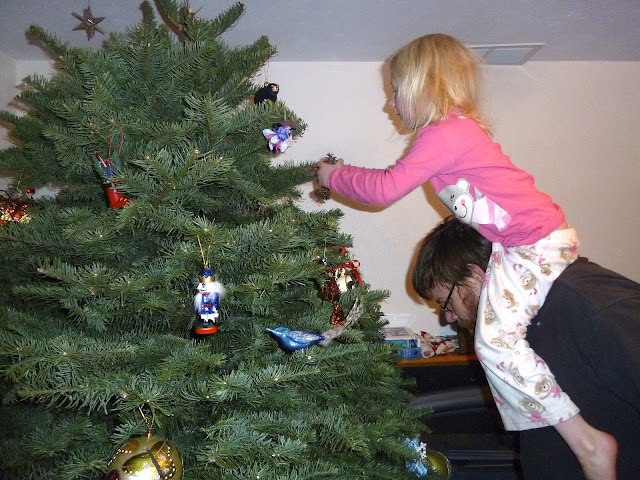 We also made our annual trip to the mall to visit Santa. Audrey was pretty cute! When I told her where we were going she said, 'Oh good! I have really been missing that guy!' Lorelei on the other hand, was not a fan of Santa. The whole time I was trying to set her down, she was saying 'no thank you mama, no thank you!' I think she thought if she was really polite she could get out of it. I still feel really guilty about making her sit there, even if it was only for 30 seconds. I picked her up almost as fast as it started. The picture is really cute though, even if she is crying in it. It's funny, I have a really cute picture of Audrey from around the same age crying too (she wasn't crying until the end when I picked her up). Audrey only asked Santa for one thing this year, a doctor's kit...I guess I better get on that.